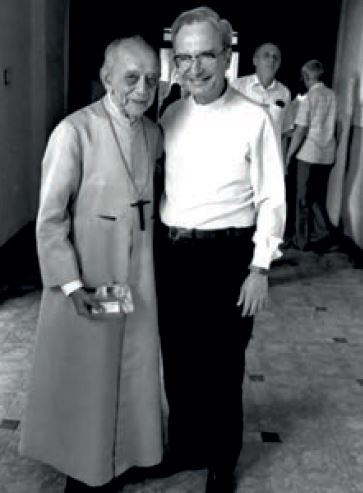 When I feed a poor man they call me a saint, but when I ask why the poor have no food, then they call me a communist.
This well-known phrase by dom Hélder Câmara meant that he was called the "red bishop", but it was not Marxism that marked his life, but love for God and neighbor which was nourished by a very deep spirituality rooted in prayer and in the Word of God. With his presence at the Second Vatican Council he promoted the Church as the people of God, poor alongside and at the service of the poorest, weakest, marginalized, exploited, oppressed.

"O bispinho", the little bishop, as he was called because of his short stature, was a great friend of Ernesto Olivero and of Sermig, a teacher of life. A pavilion of the Arsenale della Pace in Turin is dedicated to him. Some of his provocations from the 1980s continue to be as relevant as ever: Christ died for all men, I cannot exclude anyone from my fraternal dialogue. But, while loving everyone, I must nurture, like Christ, a special love for the poor.
Poverty can, and at times must, be a generously accepted gift and generously offered to God. But misery is repugnant and disheartening.
It hurts the image of God that is in every man. It violates the right and duty of every human being to fully improve him ...

Nobody deceives himself, thinking that a little generosity and social assistance is enough. If we want to get to the root of our social ills, we need to break the unfair spiral of underdevelopment and misery.
Christ taught that we will all be judged according to the way we treat him in the person of those who are hungry, who are thirsty, who have no clothes and are sick, or in prison, or a stranger. In conclusion, today, the one who finds himself fallen by the side of the road, waiting for the good Samaritan, is not a single individual, there are entire populations, entire continents, there is a whole Third World wounded, stripped, reduced to an infra-human condition. .

Church of Christ that you are in Italy, do you measure your responsibility? The Church of Christ does not need our pitiful lies, whoever belongs to Christ knows that only the truth will make us free. It would be very easy to point to the numerous works to which the Church consecrates itself throughout the world, which reveal a profound love for Christ in the person of those who suffer.
But it would be against the truth to try to forget that - at least originally - the countries that in an unjust way have crushed more than 2/3 of humanity and that the Christian part of the poor world - Latin America - have repeated and repeats the same injustices committed by Christian Europe and Christian North America.
The white minority and of Christian origin remain so blind that, faced with the absurd situation of today's world, they attribute the condition of misery to the demographic explosion of the Third World. Nor does the white minority of Christian origin suspect that the responsible explosion of the situation of the present world takes place in its bosom and is an explosion of selfishness. Life in superabundance and waste for less than 1/3 of humanity logically lead to a very low life, the misery and hunger of the remaining 2/3.

What have we done with the gospel of Christ? Church of Christ that you are in Italy, it will be fantasy to hope that the Spirit of God reserves for you the task of helping your Christian brothers from all over the world to bring the Church of Christ, entrusted to our weakness, to face its social sins, so that is there no lack of moral strength to raise one's voice to demand a more just, more humane and more fraternal way? May the Mother of the Child Jesus, who suffered so much at seeing her Son without a home to be born in and who had to flee the persecution of Herod, may the Mother of Jesus, Mother of all mothers and children, obtain us from her Son. that we do not stop at beautiful words and good intentions.

By the editorial staff
NP October 2021