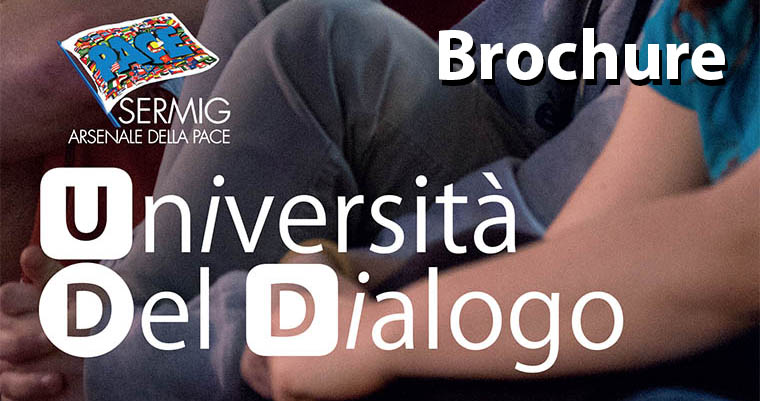 The University of Dialogue is one of the many cultural services Sermig provides every year at the Arsenal of Peace of Turin. It was created in 2004 to offer to adults and young people a permanent space of self-growth to reflect on the problems of our time, always with hope. It represents a path of search for a meaning in life, addressed to anyone who wants to share it, with the aim of promoting commitment in facing the great challenges of life, especially among young people. And our way of doing it is providing opportunities of dialogue with masters and witnesses of our time.

The first lecture of our University was given in the Vatican on the 31st of January 2004 by Pope John Paul II. He said: “The University of Dialogue aims at giving a voice to young people of every country, culture and religious faith, to build a world in which everyone is part of one human family. The dialogue we promote has to cover every aspect of social life, economics and religion”.

And so it happened. Since our first meetings, within the spaces of the Arsenal of Peace, many guests came, each one with their own personal ideas and vision, believers and unbelievers, people working in the field of culture, media, economics, politics, solidarity and art. The audience was formed especially by young people: a great accomplishment for Sermig that considers fundamental the meeting between generations to rediscover an ethics of rights and duties.

Our University of Dialogue provides thematic sessions organised in monthly meetings ("Squarciamo il buio" in 2009-2010; "Ogni porta ha la sua chiave" in 2010-2011; "Giovani e adulti riparatori di brecce" in 2011-2012; "Oltre Babele. Dal caos alla responsabilità" in 2012-2013; "La coscienza bussa. E apre la strada" in 2013-2014; "Ognuno ha l'età dei suoi sogni" in 2014-2015; "Non basta dire bisogna fare" in 2015-2016). And our lectures are structured as conversations made of questions and answers shared between the audience and the speaker. Young people formulate their own questions during group activities in the days before the meeting, and also other groups of listeners, in Italy or abroad, share their owns through an audio and visual connection.

We want to promote a constructive dialogue among the different religious faiths and cultures, to try to overcome contemporary global problems. This is why we founded the University of Dialogue, dedicated to Francesco Saverio Van Thuan and Giorgio Ceragioli. On the 12th of September 2004, at the Arsenal of Peace of Turin, Cardinal Renato Raffaele Martino gave his first lecture. This is his speech:

I am very grateful to be here with you to share your dreams and hopes for a better world based on peace and love. Our beloved Ernesto, following his vocation as founder, donated to us the University of Dialogue. It is an open and welcoming space in which you can learn unique subjects, like dialogue, respect, and peace.

Whoever prefers monologue to dialogue, perceives others as possible competitors or enemies to be defeated and does not believe in communication with who is different, is not a suitable student for the University of Dialogue.

This University, dedicated to my beloved predecessor, Cardinal Francesco Saverio Van Thuan, should also be the University of Peace, because dialogue is a fundamental precondition for peace. To solve problems that naturally arise among people and different religious faiths, you can either start a dialogue or a fight, and Christians should always choose dialogue.

In the University of Dialogue, we should teach that peace is a gift and a promise of God.

Peace is Jesus Christ Himself, made man to bring us His Peace (John 14, 27), and let us meet Him. Peace is a gift, to help men face their weaknesses. Peace is a promise, and it will be given to us when the time is right. However, peace is not an abstract notion that will happen just in a remote future. Peace is actually fully immersed in History because it derives form a gift and a promise that extend beyond the boundaries of time. As the Word became flesh in Jesus of Nazareth, Peace should now become part of our everyday life through our commitment.

Peace is hope, but also action, choice, life and commitment”. Catholic Catechism also states: “Peace is not just the absence of war and a balance between conflicting forces. Peace cannot be achieved without protecting people and goods, free communication, respect of human dignity, brotherhood and the ‘tranquillity of the order’ (St Augustine, De Civitate Dei, 19,13). It is a ‘fruit of righteousness’ (Is 32,17) and a result of charity (Gaudium et Spes, 78)" (CCC 2304).

According to the Christian vision, the most important aspect of peace is its interior dimension and so the individual actions of people. And the source of peace is love, so peace can only spread from people who are able to love.

My dear young people, peace can only spring from a new heart! These are the words of Pope John Paul II who, back in 1985, said ‘If the current methods men are employing to pursue peace are not effective, we should change men’s hearts, to renew systems and institutions’. (Message for the World Day of Peace 1985, n. 1). A changed heart, now able to feel love, allows us to look with new eyes at the many problems that trouble our world, like the poverty of millions of people, lack of respect of human rights and conflicts, happening especially in Africa. If we stop for a moment and consider all these tragic situations, we cannot deny that our world needs to be deeply changed.

What ways should we follow to operate this urgent change and finally bring peace to the world? Always keeping in mind and within the heart the teachings of the Church, the University of Dialogue should indicate four main ways.

First of all, the way of justice, because peace derives from justice (CA, 5).

Secondly, the way that leads every man to self growth, because ‘growth is another name for peace’ (PP, 76-87).

Thirdly, the way of solidarity, because also solidarity is another aspect of peace.

And finally, the way leading to respect of human rights: the right to life, at each one of its stages; the right to respect, regardless of race, gender and religious faith; the right to necessities, to a job and an equal pay, to culture, freedom and God. Where everyone follows those ways, peace flourishes.

My dearest, you are living the time of youth and it should be a time of growth for you to become men and women of peace. The University of Dialogue should be a teacher, guiding you to the right spiritual and cultural behaviours.

- Cultivation of a sense of universality, as your Christian response to the problems of globalisation, because everyone of us is involved in it.

- Cultivation of awareness, the sense of unity of the human family and social welfare that transcends national interests. Humanity is the same within each of us.

- Cultivation of your interior peace to achieve social peace. And remember that peace is not just the absence of conflict. Conflict should be understood first, and then overcome, in order that it does not turn from being a motivation to violent aggression.

- Cultivation of a deeper awareness of great social and political problems affecting our world, especially poverty.

- Cultivation of the sense of respect of human rights and dialogue.

Men of peace seek dialogue, because they learned to live with others and for them. Erase from within yourselves the notion of ‘foreign’. This notion brings with it the idea of ‘different’ and ‘outer’ and promotes a sense of separation and division. We should learn to consider everyone as unique, as a creature of God and a brother or sister for us.

- Cultivation of a strong rejection of war and violence as methods to solve conflicts: today no war is feasible anymore.

- Cultivation of a deep love for God that revealed Himself to us through His son Jesus Christ and the Holy Ghost. Men and women of peace know that every good thing and everything we are and do comes from God as His gift. Thus, dedicate your time and energies to pray for peace. My dearest young people, the University of Dialogue should be a place of Christian love. Love requires dialogue. Men who love, were born and live within dialogue with God and with their brothers and sisters. Dialogue allows us to share the situation someone else is living and better understand ourselves and the others. It allows us help whoever we meet during our life, so diversity can become a source of enrichment and growth, and not of rivalry. Love asks for the acceptance of diversity. In our multiethnic world, love is a fundamental necessity for solidarity.

To show solidarity today means understanding the interdependence among the different countries and among men and make it positive. It means effectively fighting agains sin with strength and changing cultural attitudes, if necessary. Especially because, as Pope John Paul II said, our attitude shapes ‘the relationship of men with themselves, with others, with the community they live in and also with those far away and with nature’ (Sollicitudo rei socialis n. 38). So, this is the type of solidarity the Church proposes: a solidarity that becomes ‘a way towards peace and growth’ (cfr. n. 39).

So, my dearest young people, always remember that they can only be achieved through a solid network made of love, friendship and dialogue that needs to be protected every day. I wish the University of Dialogue to be a model of hope and light.”

(President of the Pontifical Council for Justice and Peace)