Story of a transformation

On December 2004, the Order of Padri Somaschi donated to the Sermig Foundation their property “Torre dell’Eremo” (the Hermitage Tower), constituted by 34.700 square metres of agricultural land and woods and a 900-square-metre building. The Arsenal of Peace of Turin, with the help of the young people who frequent it, cleaned up the land and woods to make room for local cultivations and an orchard. A group of experts, then, freely planned the project for the refurbishment and extension of the structure.

In 2011, the works for the Tower’s refurbishment and restoration started, also extended to the adjacent building of historical importance. In addition to this, new edifices were erected, covering an area of 2.000 square metres.

The works ended in 2016 and the whole complex now includes laboratories for food transformation, guest rooms with 25 beds in total, a kitchen and a dining room, meeting rooms and a conference hall. A chapel was rebuilt in the Tower to serve everyone who wants to reflect, pray or just enjoy a moment of silence.

The beginning of a community at the Arsenal of Harmony

From the 5th of September 2016, Torre dell’Eremo has become the Arsenal of Harmony, and a small brotherhood from Sermig permanently lives there since then. The rooms of the first floor are dedicated to the project “Vita ai Bambini”, a temporary accommodation for children and young people with major illnesses. They are mainly foreign people, coming from the poorest countries of East Europe, Central Asia and South America, where there are no adequate medical facilities to treat them. These young patients are helped by international organisations working in defence of the rights of sick children (especially Lifeline Onlus and ATMO Onlus), together with the Hospital Social Services (especially the Children’s Hospital Regina Margherita of Turin).

Sermig offers a house to the little patients and their families for the whole period of treatment, bu also for the following trimestral, semestral and annual check-ups, sometimes necessary even five years after the first examinations. The average time of stay for each family is around one year and a half and a homely environment and the presence of the Brotherhood and volunteers from Sermig provides for the children a friendly atmosphere and many recreational and educational activities. We also provide a homeschooling service. The families too can find help and support to go through a difficult and delicate time. 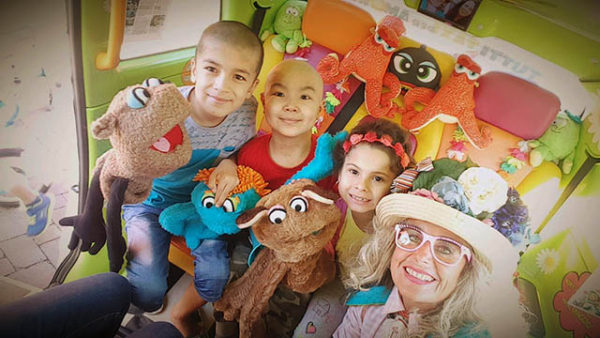 The heart of the project at the Arsenal of Harmony is to offer to a group of disabled people above sixteen the possibility to do a job related to food transformation: from bakery to ice-cream making, from honey to preserve production. Within the complex, there are equipped laboratories in which a qualified staff supervises their learning. The main aim of this project is not only to train them for a job, but also to offer spaces to enhance their abilities and potentialities. We aim at creating a place of socialisation and integration in which everyone can contribute to a shared project with their work and responsibility. 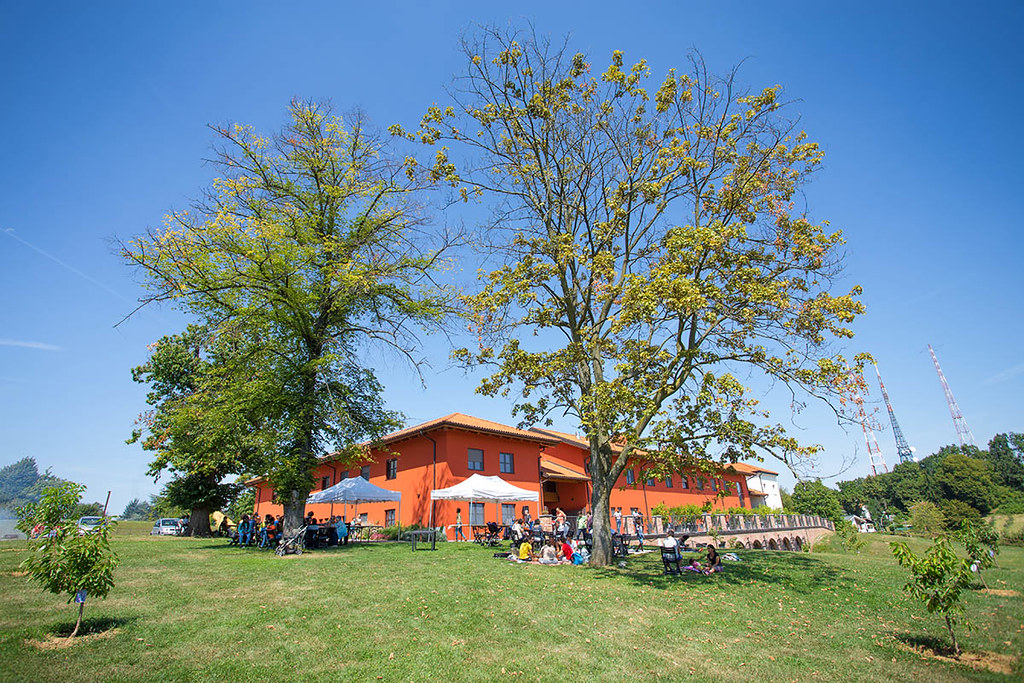 However, our project is not only dedicated to disabled people. Indeed, our woods and orchard offer also to young people in general the opportunity to come closer to God through contact with nature. For many young volunteers, this will be the opportunity to take care of nature, cultivate a garden and learn new growing techniques. In addition to this, the Arsenal of Harmony also wants to be a place of meeting for young people, especially coming from the surrounding territory, who wish to learn more about social and environmental subjects, experience silence, have a debate, pray or offer their help.

Besides the donations coming from supporters and friends, the Arsenal of Hope wishes to reach financial independence: through the production and sale of food items, by hosting groups of students and young people for didactic tours, renting out spaces for meetings and events and serving food in its restaurant. Thanks to an agreement with the Town Hall of Pecetto Torinese, the Arsenal also houses an info point to discover the surrounding hills.

History of a hermitage

On the 9th of August 1598, plague spread in Turin. The young Duke Charles Emmanuel I of Savoy knew well the risks of an epidemic for his city, therefore he asked for God’s help through prayers, vows and the organisation of processions. The Duke’s confessor was Ascanio of the Marquis of Ceva and Garessio, a Camaldolese father and close adviser of Pope Clemente VIII. Ascanio suggested to the Duke to make a vow: if the epidemic had ended, he would have built a hermitage on the model of that of Camaldoli. The Duke liked the idea and accepted it, therefore, when the epidemic subsided, leaving the city and its inhabitants exhausted, it was time to fulfil his vow. He delegated Ascanio to search for the right place to build the hermitage and the father focused especially on the hills surrounding the city. The hill of Superga was discarded because it was difficult to reach and there was not enough water there. In the end, the hills around the small town of Pecetto were chosen. 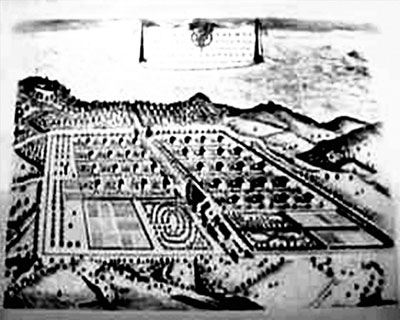 This area, with its springs and streams, was suitable for the establishment of a farming community. On the 21st of July 1602, at the presence of his family, the Clerk and the whole Court, the Duke laid the foundation stone of the Camaldolese hermitage, a complex that would have cost as much as 4000 golden coins and 107 workdays. The Camaldolese Rule would have regulated the life at the hermitage, with its strict austerity and commitment to almost perpetual retreat. Architect Ascanio Vitozzi from Orvieto was entrusted with the building of the complex.

The church of the hermitage was completed in four years. The Duke named it “Regia Cappella dell'Ordine della SS. Annunziata”, in honour of the highest order of chivalry within the Savoy family. The consecration of the church, and of the whole hermitage complex, took place on the 28th of October 1606, at the presence of Monsignor Broglia, archbishop of Turin, the Duke’s family and many people from the Court and the Municipio. The complex was built according to the Camaldolese rules that established for each monk a small house, with a bedroom and an oratory, a study or a laboratory and a small garden and well, so that he could pursue a life of absolute solitude and silence, characterised by work, study, prayer and penance.

When we, the people from Sermig, first visited the hermitage and saw it in a state of ruin and covered in weeds, it was difficult to imagine how important it was at the end of the eighteenth century. For two centuries, it was a wealthy monastery, which housed thirty monks, together with twenty servants and labourers. In 1604, the French troops violently attacked the surrounding hills and their vineyards, committing a bloody massacre at the nearby Mount of Cappuccini, but, fortunately, the hermitage was spared. It was just the coming of the French Revolution and the Napoleonic decree of the 2nd of March 1801that disturbed the quiet life at the hermitage, which was definitively closed, and whose goods were confiscated. Monks and wealths dispersed: the former within other Camaldoles communities, the latter in the hands of the rapacious conquerors. The hermitage would never recover and, in 1809, the whole complex was auctioned off for 14.500 lire. Banker Giuseppe Rayneri bought it and converted it into an elegant country house. Then, in 1847, it was Monsignor Lorenzo Gastaldi, archbishop of Turin, who bought it in order to create a place of vacation for seminarians. During the Second World War, the hermitage belonged to the automobile manufacturer FIAT, which transferred its strategic section there.

Then, part of the complex returned to the Curia of Turin and the abbey was almost completely demolished to make room for a large building that became a branch of an important city hospital, then a retirement home. On the other hand, the buildings surrounding the tower were used as a summer camp, then as an orphanage. During the 1980s, this part of the complex gradually fell into disuse and was inherited by the Order of Padri Somaschi. Today, only the ramparts, one of the two bell towers and a building next to it remind us of the ancient hermitage and its story. In addition to these, also a crenellated tower survives, probably ordered by the Duke himself to supervise from above the works for the building of the hermitage. 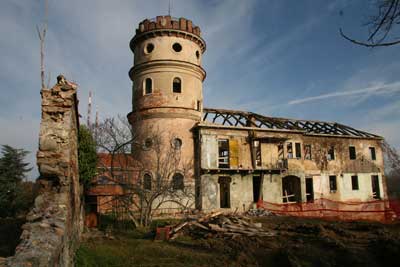 On December 2004, the property called “Torre dell’Eremo” was donated by the Piedmontese and Ligurian branch of the Order of Padri Somaschi to Sermig, so that it would be used as a place in which to help people in difficulty and educate young people, according to the aims of the organisation. In Turin, Sermig transformed an Arsenal of War into an Arsenal of Peace, in São Paulo of Brazil, it converted the former “House of Sorrow” into the House of Hope, and so in Jordan, where the Meeting Point Arsenal was founded. However, in addition to its Arsenals in the heart of cities, Sermig has always wanted to provide also some “hermitages of silence”, quiet places surrounded by nature in which people can rediscover a personal contact with God.

When the Padri Somaschi offered Torre dell’Eremo to Sermig, this desire seemed to become more feasible. Each one of the houses of Sermig has an area dedicated to the daily care of the weakest. In Turin, they are represented by lone women with children, refugees and people who receive an opportunity to change their lives, while, in São Paulo, they are men coming from the streets. The experience of job training for disabled young people already started at the Meeting Point Arsenal in Madaba, Jordan, convinced us that Torre dell’Eremo was the right place for something similar: a project of job training for people just coming out of school who want to start to work in the field of agriculture. We wish to introduce young people to nature and its richness and values, to offer them a new point of view and make them discover silence, spiritual quest and an opportunity of meeting with God.