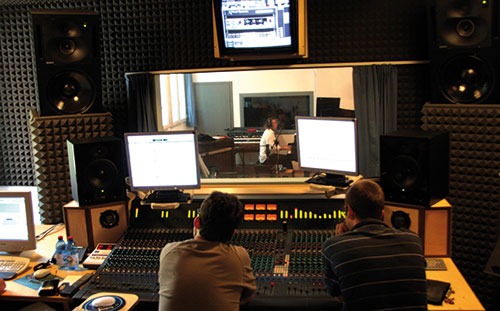 The production center was created to give the Sound Laboratory the possibility of directly treating its own musical productions to serve the purposes of the Sermig and the Academy, but it opens (since 1998) to a vast external clientele with the intention of responding with the same professionalism to the needs of young newcomers as well as important and established clients.

The current filming room, built in 2000 and designed by the Studio of Ing. Brosio (Turin), given the quality of the original project, has remained substantially unchanged to date, except for some minor minor improvements. The direction, instead, has been constantly developed, now for the continuous updating of the hardware, now to face the new necessities of the music production in general, that today uses in massive way of virtual instruments.

The studio (which is rented occasionally) is mostly dedicated to productions that are artistically entrusted to the resident staff. It's about discography but mostly multimedia and music at the service of images (films, documentaries, television, soundtracks, commercials, jingles, etc.). In this respect, the winners' list of the Production Center is highly respected, boasting important collaborations and the production of audio contributions widely distributed by the main national television networks.

The Center has also participated in the drafting of educational editorial supports in use in primary and secondary schools in our country.

Being born to make acoustic music in general (performed by a flesh-and-blood musician and a real instrument), the structure has a well-stocked agenda of professional musicians, thanks to which (when the budget allows) it is possible (and incredibly too fun!) work in a traditional way (without using virtual instruments) with orchestras, choirs, ensembles, quartets and quintets of all types and genres, to make the productions entrusted to him.

The Center has two auditoriums wired with the director and other rooms that can be used for ensemble music and concerts (from 20 to 500 seats). Thanks to the mobile direction, the availability of professional equipment and the close collaboration with the Acuson company in Turin, the Center can make external recordings of any kind, as well as video recording and editing in the formats required by the market.

Over the years, the resident staff has gained an enviable experience in the music production sector in general. The technical staff (a fact taken for granted by the art staff) reads music, whether it is score or full score, and is able to listen to a recording by following the part.

You can visit the recording studio, ask for information, and make appointments by calling 011 4368566 or by writing to lab@labsuono.it.