The feast that we celebrated on August 2 has a precise beginning: on November 4, 2000 I wrote the prayer indicated in the collection with the number 3.907: Maria Madre dei Giovani. A prayer that broke out in my heart. I certainly did not realize that I had called the Madonna with a new name. Who would have guessed it? I perceived it clearly on February 3, 2006 when, for a number of circumstances I would dare to say "providential", I found myself face to face with Benedict XVI. We were left alone. At the time of my leave I took out the small poster created by Piero Reinerio: the light blue profile of a tall and slender Madonna and the prayer to Maria Madre dei Giovani. I told him that it was the prayer we recite every day at the Arsenale della Pace, the Arsenale della Speranza in Brazil, the Arsenale of the Meeting in Jordan and at every appointment with young people, wherever we are, to entrust them to the Madonna, so that they accompany and protect them. I read it to Benedict XVI. And he said: "How beautiful!" Ashamed a little, I told him that John Paul II had also liked it, who had even signed it, making it somehow his own, without daring to ask him. Please I asked Benedict XVI if he too wanted to sign it. I had no time to be surprised that he signed it. After almost six years from that November 4, 2000 I realized that Our Lady had given me the privilege of proposing her with that new name. And then I told the pope again that we were missing an icon depicting the face of the Madonna with this new name. The pope invited us to look for her and assured us that he would bless her. 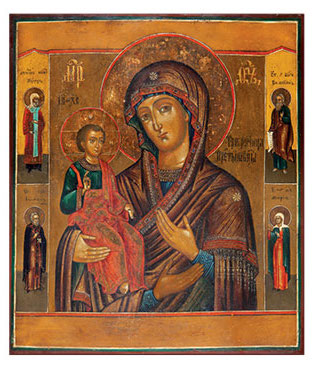 From that moment my research began to give a face to Maria Madre dei Giovani. I found her in 2010 and on August 15 of that year I went back to the Pope and told him all the passages that had brought her to Sermig. Benedict XVI blessed her and on the copy I had brought him he signed his signature.

However, this year's celebration was born from the meeting with my bishop, Msgr. Cesare Nosiglia, who blessed the icon and, once he got to know the dialogue with the pope, enthusiastically accepted my proposal to start celebrating Maria Madre dei Giovani. The intense letter he wrote to us on 2 August last year: «On the eve of the Synod of young people, a great opportunity for evangelization and growth for our diocese of Turin, I would like everyone to entrust ourselves to Mary, invoking her in prayer with the title of Mother of the young. Today, August 2, is a significant and important date in the history of Sermig [...]. Therefore, let it be the annual day when, together with the fraternity of Sermig and all friends, our Church invokes the mother of the young with particular solemnity, to protect their journey towards the Lord Jesus and make them ever more courageous witnesses of his Gospel ».

Devotion to Mary in Sermig is deeply rooted. The day after the meeting with Prime Minister Giulio Andreotti, to whom we had asked the Turin Military Arsenal to transform it into the Peace Arsenal, we began to pray. We met every day in front of the Arsenale door and the Consolata sanctuary. And the Arsenal eventually came as a seal. On August 2, we also remember this, gratitude to Mary and entrustment to her, so that the Arsenal continues to be a motherly place forever.