Emergency in Sao Paulo in Brazil 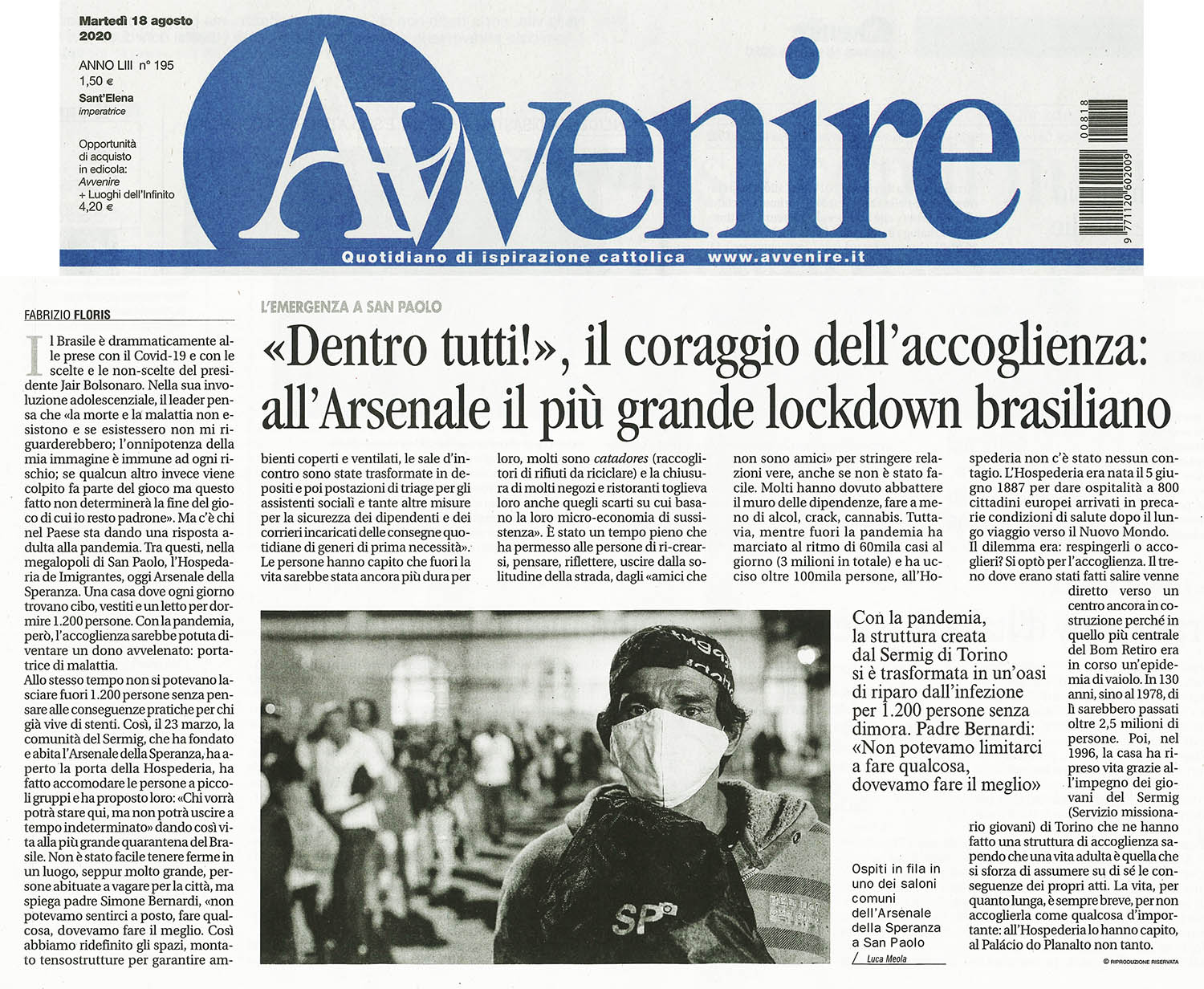 "Everyone inside!", The courage to welcome: the biggest Brazilian lockdown at the Arsenale.
Brazil is dramatically struggling with Covid and with the choices and non-choices of President Jair Bolsonaro. In his adolescent involution, the leader thinks that «death and illness do not exist and if they did exist they would not concern me; the omnipotence of my image is immune to any risk; if someone else is hit, he is part of the game but this fact will not determine the end of the game of which I remain master ». But there are those in the country who are giving an adult response to the pandemic. Among these, in the megalopolis of São Paulo, the Hospedaria de Imigrantes, now the Arsenal of Hope. A house where 1,200 people find food, clothes and a bed every day. With the pandemic, however, hospitality could have become a poisoned gift: a carrier of disease.
At the same time, 1,200 people could not be left out without thinking about the practical consequences for those already living in hardship. Thus, on March 23, the Sermig community, which founded and lives in the Arsenale della Speranza, opened the door to the Hospedaria, accommodated people in small groups and proposed to them: "Whoever wants to can stay here, but he will not be able to leave indefinitely ”thus giving rise to the largest quarantine in Brazil. It was not easy to keep still in a place, albeit very large, people accustomed to wandering around the city, but Father Simone Bernardi explains, “we couldn't feel right, do something, we had to do the best. So we redefined the spaces, mounted tensile structures to guarantee covered and ventilated environments, the meeting rooms were transformed into warehouses and then triage stations for social workers and many other measures for the safety of employees and couriers in charge of daily deliveries. of basic necessities ". People understood that outside life would be even harder for them, many are catadores (waste collectors to be recycled) and the closure of many shops and restaurants also took away from them the waste on which they base their subsistence micro-economy " . It was a full time that allowed people to re-create themselves, think, reflect, get out of the solitude of the street, from "friends who are not friends" to form real relationships, even if it wasn't easy. Many have had to break down the wall of addictions, do without alcohol, crack, cannabis. However, while outside the pandemic marched at the rate of 60,000 cases a day (3 million in total) and killed over 100,000 people, there was no infection at the Hospedaria. The Hospedaria was born on 5 June 1887 to give hospitality to 800 European citizens who arrived in poor health after the long journey to the New World.
The dilemma was: reject them or accept them? The reception was opted for. The train where they were put on was directed to a center still under construction because a smallpox epidemic was underway in the most central one of Bom Retiro. In 130 years, up to 1978, more than 2.5 million people would have passed through there. Then, in 1996, the house came back to life thanks to the commitment of the young people of the Sermig (Youth Missionary Service) of Turin who made it a reception facility knowing that an adult life is one that strives to take on the consequences. of their acts. Life, however long, is always short, so as not to welcome it as something important: at the Hospedaria they understood it, at the Palácio do Planalto not so much.
Fabrizio Floris
From Avvenire 18 August 2020
Share on social media