Today the Arsenal of Peace turns 30! He celebrates them with the "Vigil to wake us up" and the "March of Hope with Mary mother of the young".
Below is the press review. 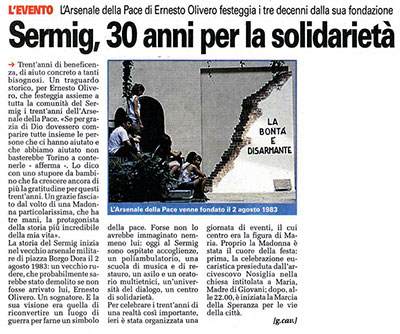 Thirty years of charity, of concrete help to many in need. An historic achievement, for Ernesto Olivero, who celebrates together with the whole Sermig community the thirty years of the Arsenale della Pace, "If by grace of God all the people who helped us and whom we helped should appear together, Turin would not be enough to contain them - he says -. I say this with a child's wonder that makes gratitude for these thirty years even more. A thank you wrapped in the face of a very special Madonna, who has three hands, the protagonist of the most incredible story of my life ».
The history of Sermig begins in the old military arsenal in Piazza Borgo Dora on August 2, 1983: an old ruin, which probably would have been demolished if he had not arrived, Ernesto Olivero. A dreamer. And his vision was to convert a war place to make it a symbol of peace. Perhaps he would not have imagined it either: today at Sermig there are hospitality facilities, a polyclinic, a music and restoration school, a multi-ethnic nursery and oratory, a university of dialogue, a center of solidarity.
To celebrate the thirty years of such an important reality, a day of events was organized yesterday, whose center was the figure of Mary.
Our Lady was the heart of the feast: first, the Eucharistic celebration presided over by Archbishop Nosiglia in the church dedicated to Mary, Mother of Youth; afterwards, at 22.00, the March of Hope began through the streets of the city. 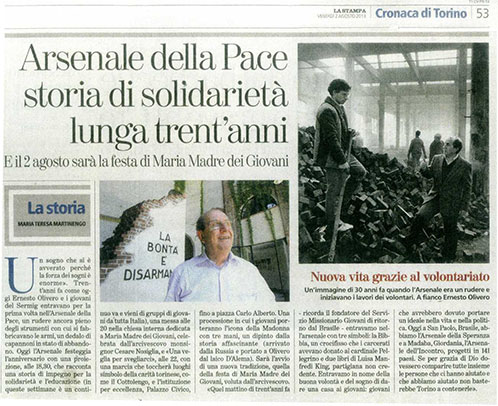 And on August 2 will be the feast of Maria Madre dei Giovani
A dream that came true because the strength of dreams is enormous ». Thirty years ago as today Ernesto Olivero and the young people of Sermig entered the Arsenale della Pace for the first time, a ruin still full of the tools with which weapons were made, a maze of abandoned warehouses.

Today the Arsenale celebrates the anniversary with a screening, at 6.30 pm, which tells a story of commitment to solidarity and education (in recent weeks there is a continuous coming and going of groups of young people from all over Italy), a Mass at 8 pm in the internal church dedicated to Maria Madre dei Giovani, celebrated by Archbishop Monsignor Cesare Nosiglia, and "A vigil to wake us up", at 10 pm, with a march that will touch places symbol of Turin's charity, such as Cottolengo, and the institution par excellence, Palazzo Civico, up to piazza Carlo Alberto.

A procession in which young people will carry the icon of the Madonna with three hands, a painting with a fascinating history (arrived from Russia and brought to Olivero by the layman D'Alema). It will be the start of a new tradition, that of the feast of Maria Madre dei Giovani, desired by the archbishop.

«That morning thirty years ago - remembers the founder of the Youth Missionary Service returning from Brazil - we entered the arsenal with three symbols: the Bible, a crucifix that the prisoners had given to Cardinal Pellegrino and two books by Luisa Manfredi King, non-believing partisan. We entered in the name of goodwill and the dream of giving a home to young people: young people who should have brought an ideal into life and politics. Today in Sao Paulo, Brazil, we have the Arsenal of Hope and in Madaba, Jordan, the Arsenal of the Meeting, projects in 141 countries. If by grace of God the people who helped us and whom we helped should appear together, Turin would not be enough to contain them ». 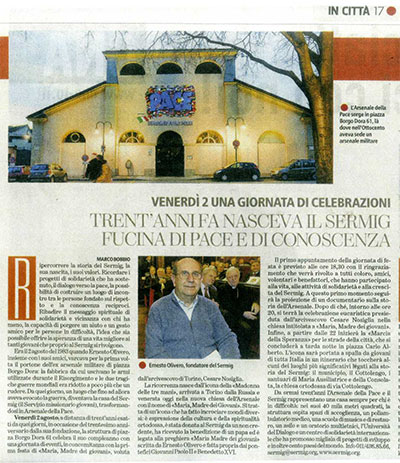 Friday 2 celebrates the 30th anniversary of the Sermig

The Arsenale della Pace is located in Piazza Borgo Dora 61, where a military arsenal was located in the nineteenth century

Retrace the history of Sermig, its birth, its values. Remember the solidarity projects that he supported, the dialogue towards peace, the possibility of building a meeting place for people based on mutual respect and knowledge. Reaffirming the spiritual message of solidarity and closeness with those who have less, the ability to offer help and a friendly gesture for people in difficulty, the idea that it is possible to offer the hope of a better life to the many young people who right at Sermig turn.
It was August 2, 1983 when Ernesto Olivero, together with his friends, crossed the door of the former military arsenal in Piazza Borgo Dora for the first time: the factory from which the weapons used during the Risorgimento and the two tragic world wars came out it was reduced to little more than a ruin. From that day, a place that until then had evoked the war, became the home of the Sermig (the Missionary Youth Service), becoming the Arsenal of Peace.

On Friday 2 August, exactly thirty years after those days, on the occasion of the thirtieth anniversary of its foundation, the structure of Piazza Borgo Dora 61 celebrates its birthday with a day of events, in conjunction with the first party of «Maria , Mother of the young », wanted by the archbishop of Turin, Cesare Nosiglia.

The anniversary comes from the icon of the "Madonna of the three hands", who arrived in Turin from Russia and is venerated today in the new church of the Arsenale with the name of "Mary, Mother of the Young". It is an icon that brought together different worlds: it is an expression of Orthodox culture and spirituality, was given to Sermig by an unbeliever, received the blessing of a pope and is linked to the prayer "Mary Mother of the young" written by Ernesto Olivero and made its own by the popes John Paul II and Benedict XVI.

The first appointment of the day of celebration is scheduled at 18.30 with the thanks that will be addressed to all those, friends, volunteers and benefactors, who have participated in the life, solidarity activities and growth of the Sermig. This first moment will be followed by the screening of a documentary on the history of the Arsenale.

After that, around 8 pm, the Eucharistic celebration will be held presided over by Archbishop Cesare Nosiglia in the church dedicated to "Mary, Mother of the young". Finally, the "March of Hope" will begin on the streets of the city from 10 pm, which will end late at night in Piazza Carlo Alberto. The icon will be carried on the shoulder by young people from all over Italy on an itinerary that will touch some of the most significant places related to the history of Sermig: the town hall, the Cottolengo, the sanctuaries of Mary Help of Christians and the Consolata, the Orthodox church in via Cottolengo.

For the past thirty years, the Arsenale della Pace and the Sermig have always represented a home for those in difficulty: in its 40,000 square meters, the structure houses welcoming spaces, a medical clinic, a music and restoration school, a asylum and a multi-ethnic oratory, the University of Dialogue and an international solidarity center that has promoted thousands of development projects and in over one hundred countries around the world. 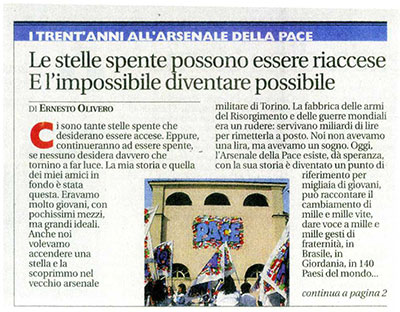 The unlit stars can be rekindled and the impossible become possible!

There are so many unlit stars that wish to be lit. Still, they will continue to be turned off, if nobody really wants them to come back to light. My story and that of my friends was basically this. We were very young, with very few resources, but great ideals. We also wanted to light a star and we discovered it in the old military arsenal of Turin. The weapons factory of the Risorgimento and of the world wars was a ruin: billions of lire were needed to put it back. We didn't have a lira, but we had a dream. Today, the Arsenal of Peace exists, gives hope, with its history it has become a reference point for thousands of young people, it can tell the change of a thousand and a thousand lives, give voice to a thousand and a thousand gestures of fraternity, in Brazil, in Jordan, in 140 countries around the world.

We entered on August 2, 1983 and our dream attracted an incredible river of Providence: thousands and thousands of young people and adults ready to donate their time, their money, their professionalism. It was a fascinating journey, which began in the 1970s after meeting a man who spoke of peace like no other: Giorgio La Pira, mayor of Florence. He said that Jews, Muslims and Christians were children of Abraham, children of God. For this reason, nobody in the name of religion can afford to call someone unfaithful, to trample on freedom, not to respect the other. La Pira then spoke of the prophet Isaiah, of his dream of turning weapons into working tools. That prophecy changed my life. I went to meet him and his friendship accompanied my first steps.

However, it was Pope Paul VI who gave wings to this dream. In 1976, I felt the need to speak with him to convey my love for the Church to him. I went to Rome with a letter from Cardinal Michele Pellegrino and nobody was shocked that an unknown boy in a white coat and blue jeans could be received by the Pope. Bureaucracy did not always stop the wishes of young people, and so it happened. I spoke with an open heart about a Church far from young people, far from people: I had a torn heart, but no judgment, only the request and the dream of a world and of a Church in which power is service, love is to give from to eat to the hungry, the stranger is a person to love. Gospel things, normal things, possible for a Christian. The Pope was not scandalized. I remember his affectionate, present gaze, which turned into an embrace and a mandate: "I hope from Turin, the land of saints, for a revolution of love".

Those words entered me and the star of the Arsenal began to spread its first glow at that moment. A few more years passed, shaped by the encounter with many men and women of God, believers and non-believers. On August 2, 1983, I entered with the Bible, a crucifix from prison, two books of a non-believing friend of mine. I did not enter alone, but as a Church, as humanity, in the name of suffering, but above all of the hope of the world. Without any presumption. Today as yesterday, we continue to pray, to be silent, to be asked by those who knock on the door. Only in this way the impossible becomes possible, only in this way will some star out, if God wants it, be able to rekindle.