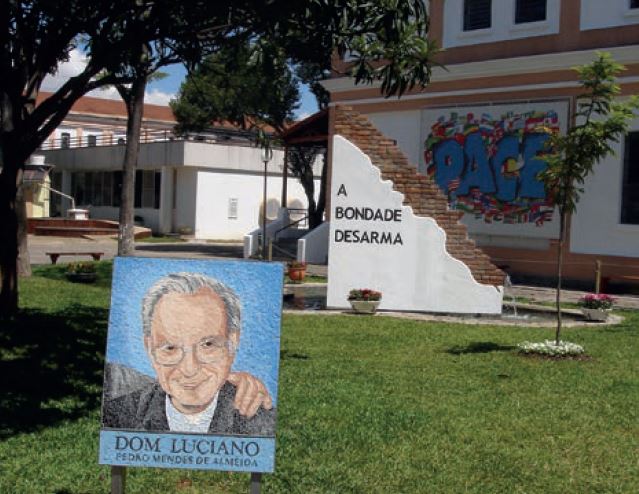 Fifteen years ago, on 27 August 2006, Dom Luciano went up to Heaven after a life of gratuitous love in service. For Sermig it was, he is a father in faith, brother, teacher and friend.
A good, humble man, all of God, all Christian. A holy bishop (Pope Benedict XVI), the holy bishop of Mariana (Pope Francis). The synthesis of his virtues is present in the prayer for his beatification, "especially love for the poor, readiness to serve, commitment to the defense of life and human dignity". «He was consumed by the poor. In him there was the Church of the Council "(Bartolomeo Sorge).

Besides being a man of action, he was a great mystic. “He radiated a profound peace that infected everyone. His advice and suggestions came from a heart filled with love and understanding. I have never doubted that I would find myself in front of a saint ”(Dom Erwin Krautler). The apostolic mysticism translated into an evangelizing charge not made of words but of a life in the presence of God. Jesuit, he had inherited from Ignatius the mysticism of service rooted in the Eucharistic mysticism which translated into "seeking and finding God in all things" (Ignatius), therefore open to the cosmos and in living the Eucharistic form. He had written in Ernesto's diary in May 2004: «In the center, the cosmic Christ! Jesus is the strength of the martyrs, it is Jesus who strengthened their faith and strengthens ours. We are called to be martyrs, "witnesses" today, of the same faith, trying to be "Christians" in a world that often does not allow us to demonstrate our faith.

"Non licet" to be Christian. Instead, loving everyone, we respond that it is precisely being a Christian who gives meaning and a happy life to the world of all times which is the "cosmic Jesus" who animates, gives life, to all of history and to every human life ". In his last public intervention three months before his death, at the Eucharistic congress in Florianopolis, of which he was one of the three speakers, he recalled that we are called to offer our life for love. «We are, as an example of Christ, called to carry out the divine plan of" loving with gratuitous love "and arouse the conversion of those who understand love and offer their lives for the salvation of those who do not understand love.

This offering of a life entirely given with Christ out of love is the "Eucharistic form" ». And again: "The disciple of Christ remains in this unjust and violent world to atone for his sins, but equally to live the" Eucharistic form ", uniting his life with Mary to the heart of Christ who offers himself to humanity in the Eucharist , to do good to others, to bear fruits of salvation (cf. Jn 15:16), to be light, salt, leaven in the world (Mt 5: 13-16). By offering their own life out of love, the disciples complete in the flesh what Christ's passion lacks "in favor of his body which is the Church" (Col 1,2) ».

The first great revelation that we can grasp in the Eucharist is a theophany, the manifestation of God's love which calls us to transform society. Beloved, we love. «A clear challenge, perhaps a very big one. We can see it made into a symbol. In a place called Arsenale della Speranza in San Paolo an incomplete, crumbling wall is built, with the writing goodness disarms on both sides, whoever arrives sees this sentence and who is inside too. This sentence is the same as in another Arsenal, the Arsenale della Pace in Turin, Italy. This is our conviction, that in the face of all the great difficulties that we may encounter in history, the great contribution that Jesus Christ brings is condensed in the revelation of the infinite goodness of God who disarms, who pulls us out, who pulverizes all evil. and which really makes the world find hope ».