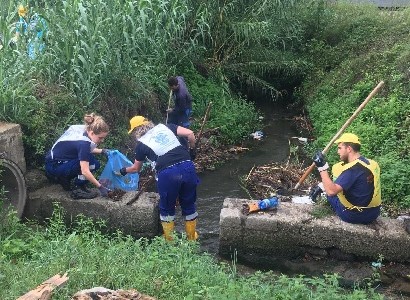 It must be acknowledged - even if a great deal remains to be done -: today the culture that smacks of ecology is very present, even in the midst of so many contradictions and too many superficialities and carelessness. We know that there are at least two ... speeds on which environmental sensitivity runs, in the face of a planet in trouble for climate change above all, and in need of rapid and radical attention. On the one hand, macro-systems, with the urgent need to reduce pollution, CO2, the impoverishment of natural resources and plant heritage, the profound breakdowns that blow up the age-old balance of the Earth and of those who live there. And in this regard, international politics is often inadequate, with delays, ambiguities, subterfuges… which make our habitats pay a high price. Then there is the more immediate dimension, which touches our lifestyles, our small gestures, our (bad) habits… which are bad for our communities and which show how we are still little warned by the abyss on which we walk. On this second front, what happened in a province of southern Piedmont may be emblematic, where, on the initiative of a foundation of banking origins, deeply rooted in the territory, one lived a Saturday, under the banner of Sweeping the world. Over 150 Municipalities mobilized, with the citizens (many) who responded to the call, to do their part in the Day for the Environment , wearing gloves, t-shirt and orange hat and dedicating a few hours to the collection of waste scattered along the streets, in the corners of the villages, on the banks of streams and bealera. We are not here to summarize the quantities of garbage that have been collected, with disappointing surprises for everything that has been found lost in the midst of our daily life. Truly a sight that embitters. It is comforting - on the other hand - to note the educational desire of so many fathers and mothers who wanted to bring their children to clean up their country to immediately learn that nothing should be thrown to the ground, that we must differentiate, that the world around the corner does not it is an open-air dustbin but a place of life with dignity and health thanks to all. Because Sweeping World was also and above all this. Giving wings to a culture of respect for one's village, making oneself responsible for the small gestures that can make a difference for better or for worse. Because we cannot go on with these unforgivable lightnesses. The planet - the only one we have - must be saved from global attacks on the environment, but no one can call themselves out.

Everyone has, in everyday life, the most immediate opportunities to avoid irremediable woe to the earth and which we must pass on to future generations still liveable. Six years ago Pope Francis with the encyclical Laudato si ' had launched a strong and motivated alarm on the unsustainability of this way of living and operating, often insolent towards the habitat of all, devastating all went crazy. The guard must be raised with courage and determination. The stakes are too high. Enough incivility!