When sport is not an example 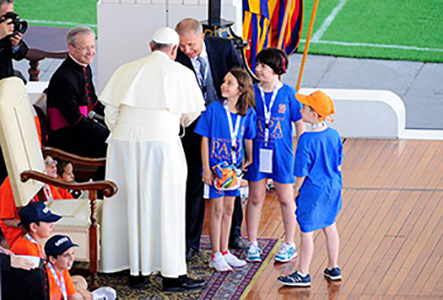 Pope Francis: "Athletes have the extraordinary possibility of transmitting to everyone, especially young people, the positive values ​​of life".
Well: in absolute contrast with the words of the Pontiff, two circumstances, lately, have contradicted these noble principles.

On 26 January, in Inter-Milan, Lukaku, the Inter forward, and Ibrahimovic, the Milan forward, clashed. The first made fun of the opponent's close relatives, while the second evoked alleged woodoo rites, practiced by the rival.
On 9 February, Conte, Inter coach, and Andrea Agnelli, Juventus president, clashed in Juventus-Inter. The former exhibited his middle finger at the opponent's address, while the latter intended assorted insults at the rival.

Anyone who practices, or attends to sport, knows perfectly well that the playing fields do not have the solemn and intimate atmosphere of a sacristy.
But the difference in these dire times of pandemic is the exception that the stadiums, sadly, are empty. Every cry echoes, sometimes rudely, as in a suburban courtyard. It is for this reason that the Pope's words acquire an even deeper significance, in the double sense indicated by Francis.

The "public" expressions and actions of members are under the eyes of the mass, and the mere fact of overcoming the boundaries of decency often has the power to legitimize the behavior of each of us in daily existence.
But also the "private" expressions and actions, today that social networks transform private into public in a moment, put members in front of ever-increasing responsibilities, especially in the presence of the receptivity of the youngest.

For this reason, those who have an image to defend, not only in sport, but in everyday life, never forget the duties indicated by Pope Francis, because they can leave behind a much more dangerous and contagious trail than it is. legitimate to imagine.