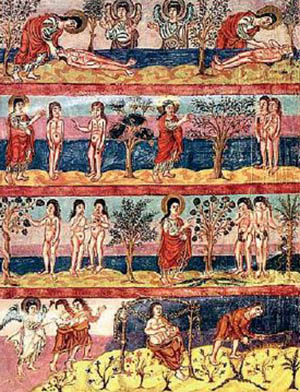 What would have happened if the Nazis had won World War II? What if the French Revolution had never broken out ?, ask the historians who delight in ucronia, literally from the Greek no time, that is, the fantasy that did not occur.

What would have happened if in the garden of Eden, instead of starting a ruinous discussion with her serpent brain that suggested malevolent thoughts about God, Eve had gone to God to tell him her suspicions? If he had spilled the beans by saying: why are you cutting us out of full knowledge? Do you want to keep the power just for you? Where are you father? Where are you good? If she had done so, perhaps she would have understood the high responsibility of collaboration to which she had been called with Adam.
Brought to light, the lie of the snake brain would have dissolved by itself, because the deception needs darkness and secret to exist and feed itself.

For this reason, in the Christian tradition since the patristic era, attention to thoughts is recommended: observing them to see where they come from and where they can lead, and behaving with negative ones as with a poisonous snake, cutting off its head as soon as it comes out of its hole. And there is no better way to cut off the head of a snake thought than to manifest it to someone. Better if experienced and not involved. First of all, however, to manifest it to oneself before God, that is, looking from the outside, from his point of view: with the examination of conscience, which must not only concern actions, Saint Ignatius of Loyola recommends, but first of all the thoughts, then words (real improper weapons) and finally deeds.

To sift through every evening (but also several times during the day: it doesn't take who knows how long or who knows what silence around) what happened in one's conscience, re-reading the day as a page of sacred history. We will discover in us from time to time a bit of Eve, a bit of Adam, Cain, David, Solomon, Judas or Peter, but perhaps also a bit of Elijah or John the Baptist, who knows. Provided without a sense of guilt, which is only a manifestation of self-centeredness: because I do not correspond to the ideal image I have of myself. Instead, accepting remorse in peace, sadness for the evil done, which must be listened to and presented to God.

The important thing is to remember, never pass anything over in silence, do not bury, do not deny the negative, but be aware of the wrongdoings and also of the gifts: and of the sympathy with which God looks at me, he who already has my ills and nailed to his cross and he does not remember them anymore. God doesn't ask me for a fantasy of my life. He asks me: what you are, that you and I know well, do you want to give it to me? Let's write together, you and I, a true story? I'm there, and I'm here. Trust me: as well as true it will be a wonderful story.