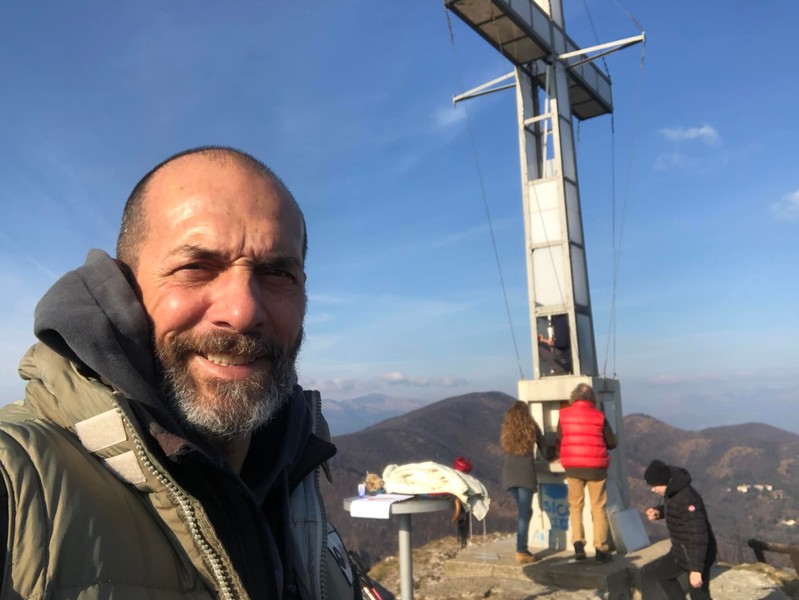 Today I am happy, filled with a feeling of hope that intoxicates, leaves me breathless, and that is the result of a gesture that Roberto (invented name because he himself asked me to remain anonymous) gave me. Unknowingly, he managed to rekindle other hearts of many citizens of the country where I live, and I want to thank him for this.

Last Saturday, accompanied by some volunteers from the On Association, I reached the summit of Monte Poncione where a majestic iron cross of about ten meters stands, with the aim of organizing the replacement of the glass panels that complete the structure.
The evocative view that widens to 360 °, and which embraces the seven lakes of the province of Varese, was immediately blurred when we realized that someone had defaced the concrete base of the strongest symbol of Christianity with blue writings.
I felt anger, not so much because that stunt forced us to work hours and hours more, but because I could not understand the reason for such a disrespectful gesture.

That cross, for the inhabitants of Valganna and Valceresio, has a profound meaning that finds its origin more than a hundred years ago, thanks to some willing Alpine troops who laboriously carried it to the summit, and which culminates with its first ignition in the occasion of his 100th birthday, which remained in everyone's heart also because it was accompanied by a special blessing from Pope Francis which included, in addition to the cross, the users of the park and the volunteers who work there.

For this reason, its disfigurement has created a very active controversy, and which has found its maximum diffusion in social networks. There were those who condemned the act without taking a stand and those who instead wished the worst misfortunes to the person in charge, the fact is that everything I read did not belong to me. Then, thanks to my wife, and to other friends who have been collaborating with our association for years, we have taken a very clear position, to continue to trust young people. So, we published a post on fb with a request to the graffiti artist for an apology (even private) to the volunteers and an invitation to join us in the restoration of the cross.

I do not deny that a few days earlier Pope Francis had exhorted everyone to forgive, but not as a simple gift, as a right of those who ask for it and therefore obviously of those who make mistakes. This has contributed greatly to making us choose the path to take.
Our expectations, however, began to waver after three days of unanswered waiting, and just as we were trying to understand what else we could have done, my cell phone rang warning me of the arrival of a message.

It is difficult to describe the emotion I felt when reading those simple words, which clearly told the boy who had written them; his fears, loneliness, and also the difficulty of integration, but not only that, because the courage he had had to find overwhelmingly emerged, driven by the sole desire for redemption.
Roberto moved me. He has succeeded in what for many of us is downright unacceptable, to apologize and start again. With humility, giving the same amount of trust received, and making his gesture so great as to transform the error that originated it all into a small one.
Bravo Roberto, it will be an honor to repaint the cross with you.