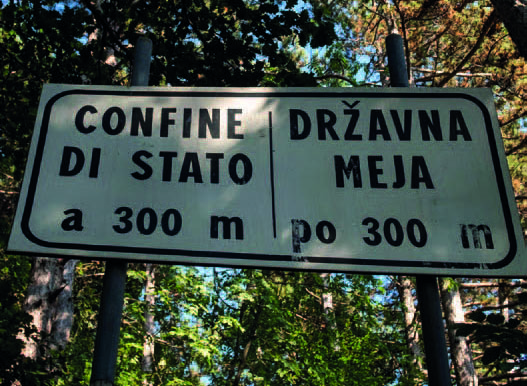 Every day I walk the paths that cut in two the woods that divide Slovenia from Friuli Venezia Giulia in the karst area of ​​the Valle di San Dorligo and Pesek south-east of Trieste.
Migrants move in small groups of two or three people. Invisible before embarking on the journey. During the day they sleep among the rocks of the Karst and prefer to move through the woods at night so as not to be spotted, when they are almost at the end of their journey they abandon the clothes used during the journey along the path.

You can find backpacks, sleeping bags and clothing but above all shoes worn and destroyed by the amount of kilometers traveled. They are the traces of a constant and silent passage that has never stopped.
According to Frontex, 15,152 people transited in 2019, while between January and April 2020, 5,987 crossings on the Balkan route passed through Trieste.

The migratory flow of the passages for the Italian border varies according to the seasons, but can also reach fifty people a day following the end of the Balkan route that from Turkey, Greece, leads them to cross Bosnia to Croatia and then Slovenia to finish. on the border with Trieste. Officially the Balkan route was closed in February 2016. The passage from Bosnia to Croatia is the most difficult.
There is much silence on what is happening on the eastern border and there are numerous reports from NGOs (non-governmental agencies) that denounce the abuses by the police against migrants in violation of international standards.

Migrants, when stopped by the local police, are often beaten, robbed and sent back to the previous border: push back, push back - so the migrants try again until they manage to cross the next border. And it is for this constant rejection that it has been called: the game, the game - but it is not a game, it is brutal roulette.
They try dozens of times, running very high risks, until they manage to pass to get to the end of the journey. Passeurs are waiting for their customers along the border lines. They charge up to three thousand five hundred euros for a ride on secondary roads or to indicate the paths to follow. The migrants are invisible, but as soon as they come out of the woods to take the first state road that descends to get to Trieste they become immediately recognizable.

Most of the time they are stopped by police or army patrols in the Safe Roads operation. Sometimes you can also meet families with two or three small children. They are identified and taken to the Fernetti border post both for quarantine according to the covid pandemic regulations but also for the asylum application procedures. According to the regulations, they can also be rejected in Ljubljana within 24 hours, since they have been stopped within the ten kilometers of the rear pass.

Slovenia in turn can reject them at the Croatian border and consequently at the Bosnian one due to the phenomenon of readmission, in short, a game on the skin of people on the run. The flow is continuous and constant, but only by going down to Trieste in the late afternoon can you have the thermometer of the daily arrivals.
In the Trieste lounge in the gardens in front of the station, under the statue of Elisabeth of Austria, better known as Princess Sissi, a small group of volunteers assist migrants with their first medical treatment. When they arrive, psychologist Lorena Fornasir tells us they are in disastrous conditions, with their feet lacerated by sores and small wounds, not to mention the marks they have all over their bodies due to the torture and violence they suffered during the long journey crossing the borders.

They are people who have walked to cross the border with Italy for more than 20 days in the woods with the fear of being attacked even by packs of wolves or bears. Lorena Fornasir and her husband Gian Andrea Franchi, (pictured) retired professor of philosophy, founded the Linea d 'Ombra Association in 2019 to provide first aid and to respond to emergencies on the Balkan route. Before founding Linea d’Ombra, they went to Bihač in Bosnia for nineteen times to bring basic humanitarian aid to the Bira camp. A male reception camp for refugees in transit inside a disused factory managed by Iom (International Organization for Migration) where thousands of people in inhumane conditions are amassed in search of crossing the border with Croatia.

Every day in the late afternoon, in the gardens of the station, a dozen young volunteer doctors and nurses from Linea d’Ombra take care of that load of invisible humanity that arrives to have their wounds treated. An open-air emergency room with benches that turn into stretchers and patients silently waiting their turn. The square becomes the place of intervention, as it is the end of the Balkan route but the beginning of a new European route that will lead migrants to cross Italy to reach a new border, almost always that of Ventimiglia.

In the first lockdow of 2020 and also during the following ones of this year, volunteers have always taken to the streets to cover health needs, as the migratory flow has never stopped, as Gian Andrea Franchi states: "Migrations are like water, they always find their way forward ». Since the beginning of the year, the association's volunteers have treated almost thirty people a day, but they have also delivered clothing and lots of shoes to face more kilometers of walking.

Among the multitude of people wandering in the square, the eyes of Iman, a thirty-five-year-old Syrian nurse and volunteer of the association, emerge from the colored hijab. She fled from a small village near Damascus, she speaks little English while she continues to medically medicate the wounds of migrants. She is worried about her family left in Syria, she has to find the money to send to her brother who is sick with her who lives in Damascus. Her story is like that of many others, made up of abuses and violence suffered during the long journey along the route.

She left with her sister, after having been for months in the Velika Kladuša camp in Bosnia she managed to reach Trieste - now Iman lives in the apartments managed by the ICS (Italian Solidarity Consortium) for asylum seekers. With the first light of the evening, a young Afghan family with two children seek shelter on a bench to put two-and-a-half-year-old Tariq to sleep. Karim the young father, whose meaning means "noble of soul", holds the last born in his arms, Aziz who does not want to fall asleep.

With his wife Nadira they fled Kunduz in northern Afghanistan in 2015 just after Norouz (Afghan New Year) and during the journey their two children were born, the first in a transit camp in Turkey and the second in a camp in Greece. It took five years to arrive in Trieste, but they want to continue their journey to reach relatives in Austria in order to be able to offer a better life to their children than it would have been in Afghanistan.
The invisible migrants, as they arrived in the station square from the karst paths, after medical treatment vanish again into darkness.
Word of mouth leads them to find a safe haven for the night.

Small groups used to moving in the dark enter the silos, dilapidated buildings abandoned behind the train station. The previous steps have left traces of abandoned mattresses and blankets that will be used to spend the night for newcomers. The following day, at the first light of dawn, they move like furtive shadows so as not to be identified and continue their journey towards the north of Europe or more often towards the Ventimiglia border with France. From that point on, they will again have to face yet another passage from illegal immigrants beyond walls and nets.