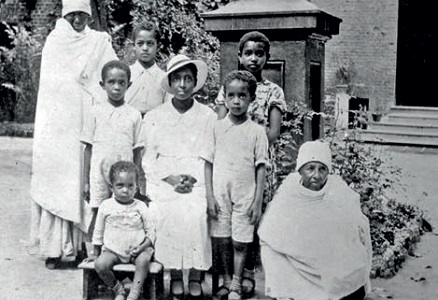 There is a story hidden in the basement of the monumental cemetery of Turin. The story of a young mother who died at just 27 years of age in 1940. Her name was Romanework, she was a princess, the first daughter of the negus of Ethiopia Haile Selassiè. His tomb is bare: a tombstone with an inscription in Italian and one in Amharic, the language of his land. Above his niche, also that of his son Chetacceu, who died just four years later in 1944. They all lived in Addis Ababa, they died in Turin. Why?

In the very few photos of the 1930s that are still available, Romanework appears proud, with the clothes of her rank, the perfect hairstyle: the testimony of a normality that would have been broken forever. That world made up of centuries-old traditions, faith and ancient culture, was struck in the heart by the Italian invasion of 1935-36 which caused scorched earth, even with the use of chemical weapons.
With the fall of Addis Ababa, the imperial family was sentenced to exile. The negus and most of his relatives took refuge in England, in London. Romanework instead decided to stand next to her husband Merid Bayané, one of the commanders of the anti-Italian resistance. They had four children and the attachment to the roots was stronger than everything.
Romanework stayed home because he felt he was in the right place. In 1937, however, Bayané was captured and killed and the doors of secret deportation to the Asinara prison camp in Sardinia were opened for her and the children. They were terrible months, marked by humiliation, hardship and excruciating pain: Gideon, the youngest son, died at just two years old.
The turning point came with the visit to Asinara by Monsignor Gaudenzio Barlassina, superior of the Consolata Missions. It was he who recognized the princess, already met in Ethiopia during her 16 years of mission. The news caused an uproar and the regime to avoid a diplomatic case accepted the proposal, also supported by Queen Elena, to entrust the princess to the Consolata Missionaries.
Romanework and the three children thus arrived in Turin, in the Casa di San Michele, near the Molinette hospital. Here they were followed by a big-hearted nun, Sister Battaglia, who did everything to restore warmth and dignity to the princess.

Those were difficult years, but Sister Battaglia managed to find clothes, comfortable accommodation, some toys for the children, above all the possibility of having them go to school. Romanework also managed to find some peace. However, life can sometimes be terrible and cruel.
In the fall of 1940, a few months after the war began, the princess fell ill with tuberculosis. There was no cure. She was rushed to the Molinette, in a ward that overlooked the Casa di San Michele. In the archive, there are very tender memories, like that image of her from behind the hospital windows and the children who greeted her from the courtyard of the house.

Unfortunately, it did not last long, because Romanework died on October 14. The children remained with the nuns until the end of the war, but one after the other they joined their mother: Chetacceu always of turberculosis, the other two instead died once they returned to Ethiopia.
The Romanework tomb remained anonymous for decades. Just an inscription: “To a mother”. The story continued to be politically embarrassing. Only in recent years has a name reappeared on that tombstone.
Today the broken life of the princess and her children still speaks. They could have lived peacefully in their land, perhaps in peace, at the service of their people. It wasn't like that. May their memory be a warning and testimony of how absurd the evil caused by war is.