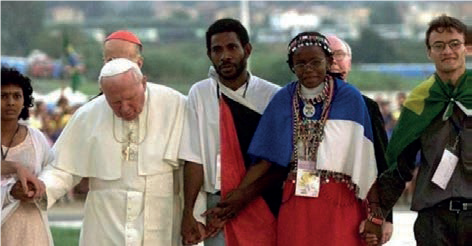 Those who were not there cannot understand. Rome, August 2000. A suspended summer. Without social media, because they didn't exist yet. Without thoughts, because at twenty you only look forward. Without fear, because it is nice to share and reflect in the lives of others. "Rome has heard this noise and will never forget it!" Said the now elderly pope. John Paul II was ill, but he gave up every energy to be present at the Jubilee event that perhaps was most close to his heart. That World Youth Day which, according to his intentions, should have given a face to the hope of the beginning of the millennium. It was like this. From 15 to 20 August, Rome was invaded by young people from all over the world. In the final vigil at the Tor Vergata esplanade there were two million: different colors, cultures, languages, the same faith. The image entered into the history of the pope who passes under a large crucifix, hand in hand with five young people from every continent.

Words that remain like stones. «It is Jesus you seek when you dream of happiness; it is he who pushes you to put down the masks that make life false; it is Jesus who arouses in you the desire to make your life something great, the will to follow an ideal, the refusal to let yourselves be swallowed up by mediocrity, the courage to commit yourselves with humility and perseverance to improve yourself and society, making it more human and fraternal.

Dear friends, I see in you the sentinels of the morning in this dawn of the third millennium. In the course of the century that is dying, young people like you were summoned to oceanic gatherings to learn to hate, they were sent to fight against each other. The various secularized messianisms, which attempted to replace Christian hope, turned out to be real hells. Today you have gathered here to affirm that in the new century you will not lend yourselves to being instruments of violence and destruction; you will defend peace, even paying in person if necessary. You will not resign yourself to a world where other human beings are dying of hunger, remain illiterate, lack work. You will defend life in every moment of its earthly development, you will strive with all your energy to make this earth more and more habitable for everyone.

A life program, of course. But also concrete hope in an era different from the current one: the unthinkable 11 September, like the river of blood that would follow between Afghanistan and the Middle East; the economic crisis still distant, despite injustices and inequalities; peace within reach between Israelis and Palestinians; the Church not yet in the maelstrom of abuse and pedophilia scandals. In those days, the pope simply gave voice to the best part of humanity, to the dreams of change that take root in those who are available. With hindsight, it can be said without doubt that his pontificate was a reflection of light and shadow. But he was a credible person and those who listened to him knew it well.

Faced with the oceanic images of the WYD in Rome, some observers spoke of the GP2 generation. Effective expression which, however, has a grain of truth. Because it's true: those young people were no better than others, many got lost, they let their ideals become moldy, becoming indifferent adults. But many others got involved, they truly believed in it, some in the family, some through a religious choice, some in commitment to society. Twenty years have passed, but the men and women they have become are also the mixture of those words heard on a summer night carved inside. Because «Rome has heard this noise and will never forget it». They haven't forgotten either.

Those youngsters weren't better than others, but many got involved, a solid way to start again.