There is room for everyone

Brazil is a huge country.
Over 200 million inhabitants, an endless territory and a divided society, marked by profound contradictions.
Just think that 30% of the income produced annually is concentrated in the hands of just 1% of the population. A reality visible above all in metropolises like San Paolo which alone has 12 million inhabitants.
"Sometimes it is a single street that divides a large luxury neighborhood, from a land occupied by hundreds of wooden and sheet metal shacks". Marco Vitale knows what he is talking about. He is one of the missionaries of the Arsenal of Hope of Sermig, which welcomes more than 1200 street people every day. «Such strong contrasts, explains Marco, concern all areas of social life. For example, education. The children of wealthy families are able to attend private schools with better teachers and facilities, the majority of the population instead the public schools, overcrowded and often lacking in maintenance. This is the case in healthcare. Those who can pay for insurance access top-level hospitals.
All the others often fail to receive drugs, hospital staff and decent beds ». 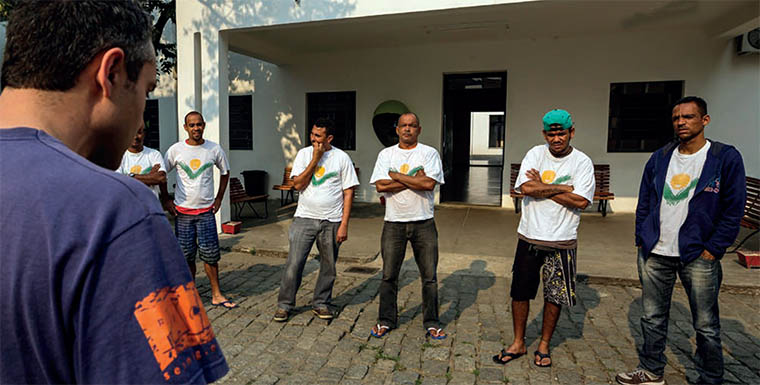 Has the pandemic aggravated the situation?
Certainly. Certainly, it has sharpened the political differences: on the one hand there are the parties that have lined up for a closure of all commercial activities.
On the other hand, the forces supporting President Bolsonaro who dismissed the covid as a "little fever" that cannot stop the economy. I would add that divisions have also emerged over the value of people's lives. Faced with the steadily increasing number of deaths, there have been many who have called for urgent measures. Others soon got used to it, simply expressing a: oh well, life is like this.

In a context like this, the poor are considered waste, as if they were ultimately responsible for their situation. Why?
This vision is also the fruit of a history of suffering. Brazil was born as a colony and at the time a large part of its inhabitants were reduced to slavery. The consequences are still there. For example, black men and women are unlikely to be in government or corporate positions. Likewise, the most influential and trendy places don't have black customers. Then there are very few black children who attend the elite of the city's private schools. Many times a certain type of religion reinforces and justifies this scenario. Poverty is seen as the sign of a distance from God, of a lack of faith in him. Wealth is instead the sign of his blessing.
In this vision, therefore, those who live in misery are because they have little faith.

How do you break this distance?
To break the gulfs that exist between the different social strata, overcoming the fears that are paralyzing people, it is necessary to transform the city into a place where there is room for everyone. In this sense, the Arsenal of Hope wants to be a home for everyone. Black and white.
Poor and wealthy. Educated and illiterate people. Who needs help and who can offer their help. Here, everyone can find a home. They may find that the many differences can be an opportunity. A house of God, where everyone is welcomed because we are all his children and beloved children. And let's be clear, it is not utopia. This is what we have been experiencing for 24 years, day and night, without ever stopping.

Interpersonal relationships can heal such deep divisions. Can you give us some examples?
There would be lots of them. Everything happens when people connect, let themselves be moved by a problem they have seen and undertake to alleviate it, involving friends and acquaintances. I think of a girl who, while volunteering at the Arsenal, realized how necessary the use of masks was to avoid contagion among those received. Lo and behold, he obtained some fabric from an acquaintance and asked his grandmother and aunts to start a large-scale production of cotton masks. These days they have already produced more than three thousand masks, without having to leave the house. Then there is a lady who, knowing of our need for food, is involving all the people in the condominium.
Now, every week they leave sacks and bags of rice and beans on his landing. A friend of ours is also one of the managers of a samba school in the neighborhood. He told the other members of the group about our requests, and they haven't stopped collecting soap, toothpaste, and razor blades to help us for weeks. There are dozens and dozens of stories that happen, just because someone becomes a bridge between worlds of the city that would hardly come into contact.

What can the Brazilian experience teach the West?
Relieving the suffering of the poorest and doing it together becomes the great opportunity to overcome any kind of division.
Dom Luciano Mendes de Almeida said that the poor are not the problem but the solution to the problem.
Once again we understand the importance of these words. Those who are not in a position to find refuge in this epidemic can turn from a problem to an opportunity.

What do you mean?
If we have the courage to offer a safe shelter, food, a friendly word, with wise shifts, all this will force us to organize ourselves, to get out of our small point of view, from the walls within which we have barricaded ourselves.
It will force us to get out of our selfishness. Little by little we will be able to get to know each other, respect each other, build relationships: a new community, a new city.