The last of the last 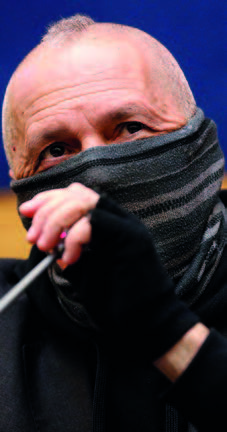 He wears the mask on his face long before Covid. Not to defend against the virus, but from the mafia. He is Captain Ultimo, that is, Lieutenant Colonel of the Carabinieri Sergio De Caprio. The man who captured Totò Riina, the head of the Cosa Nostra bosses. He cannot show his face, because he is still - and forever - on the blacklist of the mafia. So in public he shows himself like this, with a collar raised up to the eyes, or with a balaclava. No one has ever seen his face.

Now he has retired, leaving the beloved Carabinieri, having accomplished many other feats in the name of legality. Not everyone liked his ways, and he went through a lot of trouble with his superiors. But the enormous contribution made in the fight against the mafias will remain in the history of this country. He still accepted a challenge, says the Councilor for the Environment of the Calabria Region, called by the President Jole Santelli, who later died of cancer. He remained in his place, and traveled through Calabria - he, of Tuscan origin, but at home throughout Italy - to preach the word of legality. More: of justice. Now he will also have more time to devote himself to the service of the least. It has been doing it for years, in the Prenestino district of Rome, next to the Grande Raccordo Anulare, in via Tenuta della Mistica. There he founded a small family home, managed by the Capitano Ultimo Volunteers Association: they welcome minors in difficulty, in foster care by the courts. Pino Corrias writes: "Three wooden housing structures for the eight minors hosted, plus the vegetable garden, the bread oven, the canteen, the workshops where iron, leather and fabric are worked. All financed by private donations, including those of Raoul Bova and the National Singers. A place where the kids, who are also the last of the social rank, study, learn a trade, but above all life».

Small, simple stories of human and social redemption. There are also the pizzeria, the herbalist's shop, the loom. There is the falconry - which houses injured birds of prey collected by the Lipu - and there is the chapel, completely made of wood: roof, altar, crucifix. It has no walls, no doors, no windows, it is open on all four sides. On Sundays mass is said, prayed and sung. Then having lunch all together. There the Last welcomes the last ones. After putting down his uniform - which is hardly ever worn - he takes the habit of the Good Samaritan. He gives bread and education to his street children. Why do not they remain forever last.