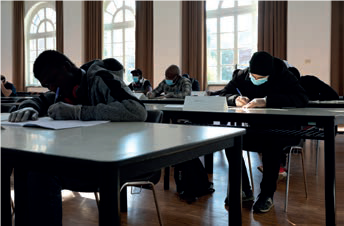 He has the eyes of the lockdown, the bags in the eyes of the weeks "closed at home", the long eyebrows of the months to come, the injuries and sadnesses of a tremendous swerve, unprecedented in recent history, of our freedoms, of handshakes , hugs and even physical involvements. He has the eyes of a high guard, hands washed, masks, gels everywhere, but also the unconscious restraint in every encounter, of a "contact" that is no longer there: mimicked by the blow of the elbow, by the hands on the heart, by the crossed arms.

My friends, the world has changed: everything. US and China caught in underground wars in the pursuit of world supremacy. Russia but not only are aiming at vaccine control because now there is "the border": political, economic, social. And let us fly over Europe, once again incapable, it only grabs downward agreements, "the minimum wage". What a pity! We all believed in it, thinking of a "fourth world power" capable of guaranteeing us. This is not the case, unfortunately. And here we are facing tough months: many companies have already closed, others do not open and, perhaps, will not open again; the panorama of the shops with the shutters down, not only in the suburbs, is bleak; semi-deserted shopping centers are a very bitter reality; the local markets are increasingly shrinking; work becomes, once more, a mirage. And that's not all: despite the government's cheerful ballet on Mes, not Mes, Recovery Fund, frugal countries, eateries or sovereignists, we are here to deal with bills to pay, taxes to pay, bills to pay to schools, buses for school transport, to the canteens (where they work) or to the shops where we have stocked up with "stalls" and cool bags for the days to come. All this with a summer that, as was obvious, does not bring us tourists but only crumbs, "hit and run" holidays to the sea and in the mountains with the rediscovery of the excellence of our home which, however, is not enough to find serenity in the family; the uncertainty of the progress of a school treated as "the last of the class" despite the bombastic declarations and commitments of a certainly insufficient ministry; masses lived as in a clinic; trips canceled or confined to the requirements of a trip among plague victims. Strict but necessary rules, for heaven's sake, with exceptions on certain coasts and in certain places that are difficult to understand and accept. The reality speaks of flu vaccines that could have started much earlier but will be launched in October; an anti Covid -19 vaccine about which everything and the opposite of everything has been said and of which, in practice, nothing is known yet. Despite this there have been "general states", dozens of decrees and councils of ministers, even more meetings of experts who advised us on everything but then in many cases denied.

There is still common sense and, as they used to say, the intelligent vision of fathers and mothers; they will be able to guide young people and children in the autumn jungle, they will have the wisdom of ideas and behaviors thanks to the strength of their families (one of the few survivors). They will help the schools to redo their first steps with a thousand tricks, the children to go to the gyms as before, to play, to study, to walk, to live. They, "the families" are the strength of this long crossing of the desert in a dead sea of ​​words, announcements, "communicative" inventions but of decision-making dunes and chaff in the wind.

And, once again, solidarity will demonstrate, as it is doing, that the fantasy of mercy is infinite, that Providence exists (as demonstrated and demonstrated by the social saints of Piedmont and many other Catholics and lay people). Italy is finding the narrow and perfidious path of rebirth, indeed of a new renaissance, strong only in itself and its past. After the days of weeping for too many dead, the fatigue of the "passage", there is a sun. But let's face it, we'll find it for ourselves. Everything else is a film of fictions, announcements, lies, tactics that has tired even the strongest and most experienced of us.