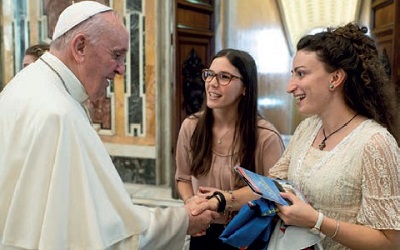 We were also among the fifty young people engaged in the field of environmental sustainability, in the fight against climate change, in the promotion of a green economy, who, led by Minister Cingolani, met Pope Francis in the Vatican last morning. September 25th.

The occasion? The COP26 - the United Nations Climate Conference 2021 - which this November will be hosted by the United Kingdom in Glasgow, in special partnership with Italy. In fact, the Pre-COP was held in Milan between 30 September and 2 October, which for the first time ever was attended by representatives of young people under 30 from about fifty countries, to discuss the proposals to bring to Glasgow. In this context, the friends of Earth Day Italia have organized an audience with the Pope.

We entered through the bronze door to head towards the marvelous Clementine room where the Holy Father listened to everyone present one by one, dedicating a smile, a word and a blessing to each one. When our turn came, the emotion was great and the things we wanted to say to the Pope were numerous. He shook our hands with a big sincere smile, and we invited him to come and visit us at the Arsenale della Pace in Turin, after having given him the flag of peace. We presented to him our desire for peace among all peoples, contained in the Letter to Conscience , a necessary prerequisite for the realization of any project linked to sustainable development. «To you young people they say that you are the future, I tell you: you are the present! I wish you to make a noise, to make yourself heard! ». This is the final exhortation addressed by Pope Francis to all present, greeted with applause and much enthusiasm. Meeting young people from all over Italy committed to the same cause, albeit with different initiatives and styles, has given us a lot of hope. We have known the dreams of many young people who, like us, wish to be able to make a difference and who, perhaps without knowing it, experience restitution in their daily lives. Our Rule resounded with decision on that day: "Different charisms but one Lord".