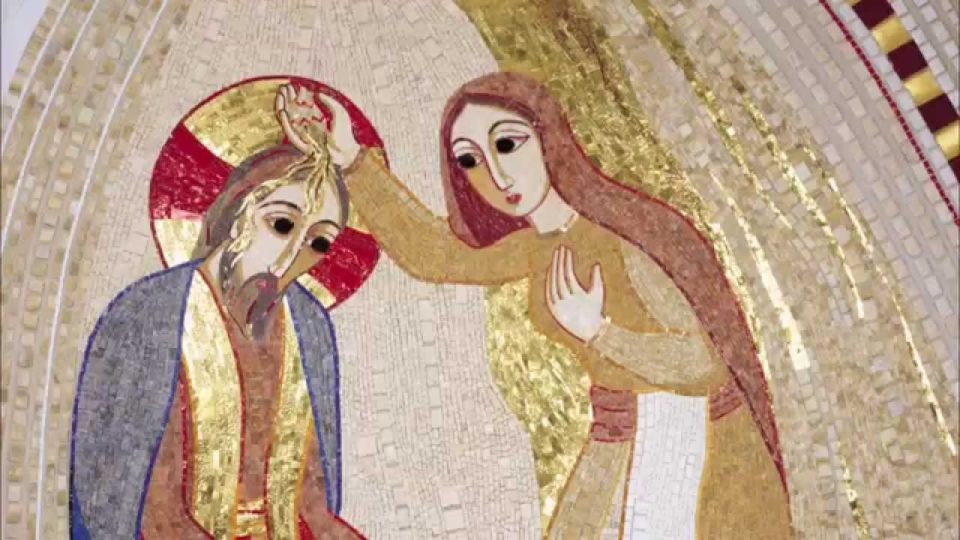 With women, Jesus speaks of theology: as at the well of Sycar, with the Samaritan woman. Jesus lets himself be touched by women, even by those that Judaism considered impure: like the haemorrhage woman, or the woman of dubious reputation who washes his feet with tears and anoints him with perfumed ointment. Jesus goes to the home of women: like Martha and Mary, with whom he perhaps eats at the same table, which Martha is busy preparing. There are women among the disciples of Jesus: like Mary who listens to him sitting at his feet. Not only that, Luca recalls: also Mary Magdalene, freed from seven demons, Joan wife of Herod's administrator, Susanna and many others. Jesus has special attention to women, especially if they are despised: like the adulteress, like the widow of Nain, like the poor widow in the temple. Under the cross, while the disciples flee, there are the women, together with the young John. It is the women who prepare the anointing of the body of Jesus.

The women were the first to sense the resurrection, talk to the risen Jesus and go to bring the announcement to men. In a fascinating apocryphal Gospel, the Gospel of Mary, it is Mary Magdalene who after the resurrection explains to the disciples the spiritual meaning of Jesus' speeches and gestures. Judaism has always attributed to women the greatest spiritual role, that of the transmission of life. , the feminine aspect of creation. In the DNA of the woman there is the shekina, the divine presence. It is no coincidence that one is Jewish only if the mother is Jewish. Jesus goes further. It recognizes the role of a disciple and apostle in women. The stories of the early Church are teeming with active women: Tabita, the first volunteer, the four daughters of Philip, prophetesses, that is, capable of speaking Christian truths in an inspired way, Lydia, the first benefactress, Damaris, the first convert of Paul, Prisca , his collaborator in Rome, Phoebe, whom Paul calls his "sister", Mary, "who worked hard" for the Christians of Rome, and again Evodia and Sintiche, "who fought for the Gospel" with Paul and have problems going agree: because they are Christian women, that is, free personalities.

It is a pity, however, that Paul elsewhere also adapts to the current mentality: "I don't allow women to teach ... women are silent, they are submissive." The woman who has faith, writes Saint Ambrose in the fourth century, is a perfect man, the one who does not believe is a woman. Of Saint Paola, the rich Roman founder of monasteries in Palestine, Saint Jerome says: Incredible fortitude for a woman! She completely forgets her sex… Despite the feminine revolution carried out by Jesus, prejudice inexorably reappears after him.

Especially after the fourth century, when the Church becomes a state church and adapts to the mentality of the world: which is misogynist. The influence of the external mentality risks watering down the Gospel and bringing trouble to the Church: in the eleventh century the claim to prevail produces the first division of Christians, from the West and from the East; in the fifteenth and sixteenth centuries, the defense of political autonomy infects the Church with power, wealth, nepotism and a thousand vices that prepare the drama of another division, with the Protestants. The Fathers of the Church are right to say that the first Christian virtue is attention. Let's be careful: we are the Church.