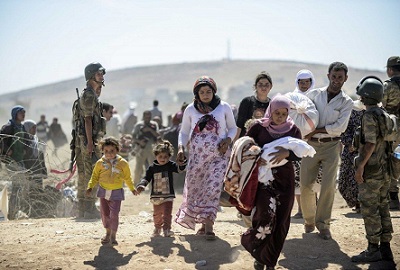 Turkey, which hosts around 3.75 million Syrian refugees, since the early years of that decade-long front of crisis, is not immune from the current wave of Ukrainian refugees who have poured out mainly within the European borders. According to sources from the Turkish Ministry of the Interior, there are now about 60,000 citizens of Ukraine welcomed in emergency in Turkey, a country that in the past has always been one of the favorite destinations of their tourism as well as that of Russia. The Russians, however, have for years started countless commercial activities on Turkish soil, particularly in the clothing sector, facilitated by the facilitated obtaining of residence permits. This is one reason why, in recent weeks, not a few Russian university students, finding the EU doors closed, take refuge in Istanbul, to escape being drafted into an army fighting a war they are contesting.

Returning to the Syrian refugee dossier, Ankara now fears that the financial aid provided by the EU for years to manage this emergency will be drastically reduced. The Turkish government complains that Europe has already disregarded political commitments under the immigration agreement, including visa liberalization for Turkish citizens traveling to Europe, opening new chapters for the process accession to the EU and the 1995 negotiations on the strengthening of the EU-Turkey Customs Union.

Meanwhile, according to the annual report Syrians Barometer-2020, supported by UNHCR Turkiye (the UN High Commissioner for Refugees) and aimed at implementing social cohesion with Syrians in Turkey, a timidly positive picture emerges but not without some inconsistencies. Commenting on it Murat Erdogan, director of the Asylum and Migration Research Center (MUGAM) in Ankara, said that most of the Syrians who fled to Turkey from the civil war in their country are happy and not they want to go home. The Syrians Barometer report, now in its third edition, is based on direct surveys conducted with 2,259 Turkish citizens in 26 provinces chosen by the Turkish Statistical Institute (we recall that, between 2011 and 2021, according to sources of the Turkish Ministry of the Interior, almost 175,000 Syrians have already received Turkish citizenship).

A total of 1,414 families were then interviewed providing information on nearly 7,000 Syrians under temporary protection in 15 Anatolian provinces. Also according to Professor Erdogan, in 2017, the rate of those who declared they did not want to return to Syria was around 16%, then rising to 34% in 2019 and subsequently again up to 58%. The fundamental reasons for this "growing love for the host country" are the fact that the war in Syria has become chronic, leaving only rubble and a fragmented and insecure country, without much hope for a stabilization in the short term. Returning to the Syrian diaspora, however, daily life and, in particular, working conditions in Turkey are still a considerable problem. If the temporary status of refugees does not prevent them from accessing health care, education and social assistance, as well as the labor market itself, it nevertheless represents a big long-term unknown.

Then there is another factor not to be overlooked, perhaps the most important. According to Professor Erdogan, although Syrians are trying to forge closer ties with Turkish society, the Turkish world remains cold and distant. Indeed, in recent years there has been a radical change in the opinion of Turkish public opinion on Syrians, now seen as one of the major problems afflicting the country, after the economic crisis and terrorism. In short, some serious acts of fascist-style violence against them, in various regions of the country, are just the tip of the iceberg of growing hostility.