The war of the Nobel Peace Prize 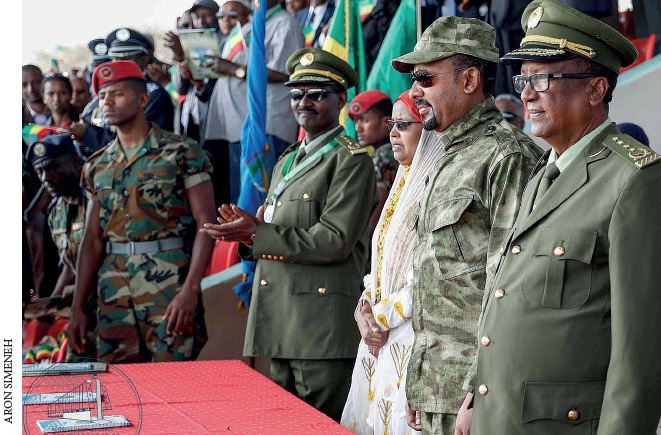 What nobody wanted finally happened.
Tensions in Ethiopia between the Tigray regional government and the Addis Ababa federal government have escalated to lead 2019 Nobel Peace Prize laureate Abiy Ahmed to declare war on a piece of his own nation.
It was thought that reason could still prevail. Instead, after months of tensions, a simplification of weapons was sought, which is a defeat for everyone.

An absurd war that tears apart a nation with a third of the population on the verge of subsistence and that even before the Covid-19 pandemic was launched - despite many contradictions - towards a development that could have pacified the nationalistic pressures of the various ethnic groups. Tensions and secessionist pressures that have sharpened for 2 years with the coming to power of Abyi, the youngest African leader who, presenting himself as a reformer, had given glimpses of great hopes for change throughout the continent. But this war cannot be dismissed as just a mistake by the Nobel Peace Prize.
The country, always dominated by the Amhara, in the last 27 years had embarked on the path of modernization under the leadership of the Tigray People's Liberation Front (TPLF, in English), which in 1991 had freed Ethiopia from Derg communism together with the Eritreans. . The TPLF has created an inter-ethnic power party where it had the majority despite the fact that Tigers are only 6% of the population. Even with a repressive and corrupt government, he started Ethiopia towards modernization. But it has passed a federal constitution that is dangerously reminiscent of that of the former Yugoslavia and offers the nine states that make up federal Ethiopia the power to equip themselves with militias and secede.

In 2018, Abiy's coming to power removed the TPLF from power, which in the meantime has moved resources and weapons to Tigray. A no-holds-barred power war begins between the first Oromo ethnic leader in Ethiopian history who wants a strong unitary government to revive the country and the TPLF men who leave the government. In the meantime, riots and ethnic clashes continued throughout the country.
Abiy is very, perhaps too closely tied to the Eritrean dictator Isaias Afewerki, with whom he ended a twenty-year conflict by earning the Nobel. Both have a common enemy, the Tplf. Last September elections were held in Tigray which should have taken place throughout the country but which Abiy has postponed for Covid. He overwhelms the TPLF and the central government of Addis Ababa, led by Abiy Ahmed, considers them illegal.
On November 4, in response to the attack on an army base, according to the central government's version, Addis Ababa declares war on the Tigrinya regional government in the north of the country, accusing it of terrorism. The conflict has taken on an international dimension due to the refugee crisis it is generating and the launch of missiles on the capital of Eritrea, Asmara.

A propaganda war and with little certain news as Ethiopia has blacked out the network and cut telephone lines, making it impossible for many people to contact relatives and friends. It is known that atrocities have been committed on both sides, massacres of civilians. Thousands of Ethiopians, many of them boys and girls, have crossed the Sudan border to escape the violence.
The United Nations has prepared an emergency plan for over 200,000 people. A tragedy that concerns us not only because the roads of Tigray were built by Italian soldiers and settlers almost 90 years ago and the names of cities such as Axum, Macallè appear in the toponymy, but because the conflict threatens to destabilize Ethiopia and the Horn of 'Africa and to restart thousands of refugees on the trafficking routes.