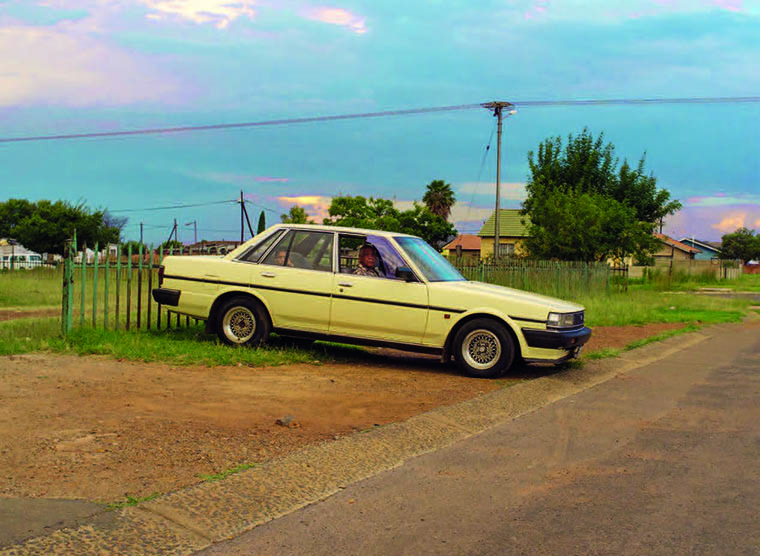 The suspended time of a parked car.

At the basis of the concept of the image is the suspension of the action. What fascinates me most in a photograph is the power of narration concentrated in a single shot. Photography does not freeze time, but expands the space between the before and after. I have always admired the photographs by Gregory Crewdson and Philip Lorca di Corcia, and obviously by Jeff Wall, three contemporary authors of the American school capable of creating powerful evocative staging, capable of communicating the characteristics of the human soul with theatrical fiction. My way of operating with respect to them, who still remain my important references on a stylistic level, consists in drawing from the ordinary everyday life, from the occasions that often without warning materialize in front of the lens of my lens, just like this shot captured in the 2012 in South Africa, near Johannesburg.

That time I was parked in front of an acquaintance's house, aboard a car that was about to take me back to town in the evening. Since I had been contemplating the scene for a while, I asked the driver to stand still waiting but with the engine off, so that I myself could take this photograph without vibrations from the open rear window which for me is really full of meanings, almost as if it were a short story or short story. The two figures sitting inside that parked beige car are two common people separated from each other more than by the seats, for at least a couple of generations. The grandfather driving, I thought, must certainly have lived apartheid considering his age, how will he now see in the mirror? Now that the man possesses an emancipated attitude clothed in dignity and lives in a decent residential neighborhood, he finally seems satisfied and proud in his second-hand sedan. Yet in the rarefied calm of the evening there was something imperceptible that contrasted like a tone out of tune, out of place. I tried to think about who they were waiting for and no, they didn't seem upset by the fact that I was photographing them from a few meters away. On closer inspection, their absent gaze runs along lines of indefinite horizons, a haze that cannot be seen in the photograph except from the eyes.

There is something like a mystery in this shot worthy of a David Linch film, they don't look like two going to a baseball game, or to the supermarket, rather a funeral. At the same time I thought: what will the situation of this rich and prosperous land be like when his grandson sitting in the back seat is at least 60 years older? Will Africa be the new America? Will this terrible feeling of permanent mourning vanish once and for all?