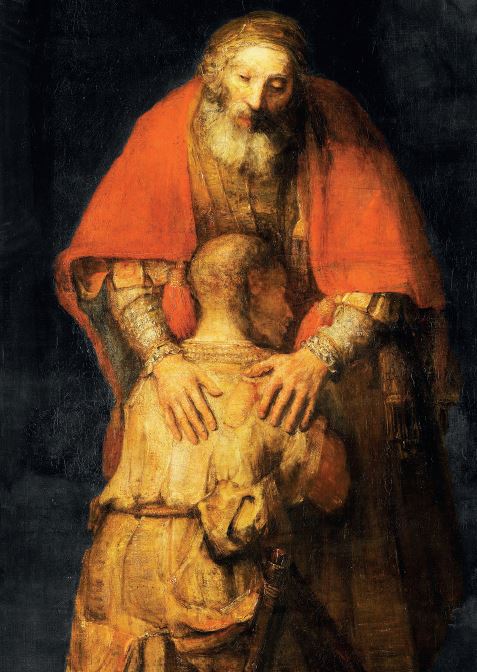 The Christian who sins aborts the Logos, expels the Word before giving birth to it with works ». Strong but brilliant words like its author, Origen, a great of the third century who said things about penance that everyone had to deal with. Above all we, children of a time that watered penance to the point of turning it into a banal psychological discharge from the sense of guilt. No! Losing the theological meaning of penance is having already lost that of baptism, because the two sacraments are linked: penance is the sister of baptism. With its dramatic gestures, baptism tells us that we do not save ourselves.

We save ourselves by entering the death and resurrection of those who have shown us that our vocation is to live as children in the Son of God, who died and rose for love of us. We need him to breathe, and to breathe the Spirit, because we are not made up of only two elements, body and soul, but of the Third, the Spirit, seal of the Creator and our Father. Whoever sins, says Origen, "interrupts communion with God, no longer receives the life-giving flow of the Spirit: he is a dead soul". Be careful to look carefully to whom to confess your sin: "Test the doctor first ... if he knows how to be weak with the weak, cry with those who cry, if he knows the art of sharing pain and suffering ...". Do not be ashamed to say the worst about yourself: "Silenced sin takes root deep in the soul and takes possession of it, while guilt loses strength if confessed, the sinner vomits and makes the cause of his evil disappear". Forgiveness, however, erases the traces, the scars that sin has imprinted within and are perceived as an interior division, but it does not change the orientation of the sinner.

Victory over evil is a long story! It means converting mentality and will. The classic three Hail Marys or an Our Father often given as "penance" do not convert it. The "excommunications" of early Christianity changed it, three years without being able to participate in the Eucharist if the sins were the "incurable": apostasy, adultery, murder, violence. Three years to restore the image of the Son in the sinner, who was again formed in the mysteries of the faith by a mature Christian. For confession to be truly the sister of baptism, even today we need to work on the existential transformation of the person with "penances" that become real "penitential paths". Healing the contrary with the contrary, that is, using the symmetrical pairs of vices and virtues to make the painful consequences of evil felt more acutely.

To those who are miserly, to make a large payment of money to the poor; to the adulterer, to send him on a pilgrimage to the church where he got married; to the thief, to have the stolen goods returned; to the boastful, to assign a hidden charity; to the lazy person, to have a psalm memorized. For the priest who welcomes confession it is an opportunity to unleash his creativity. For the sinner, to live a concrete experience of liberation from himself.