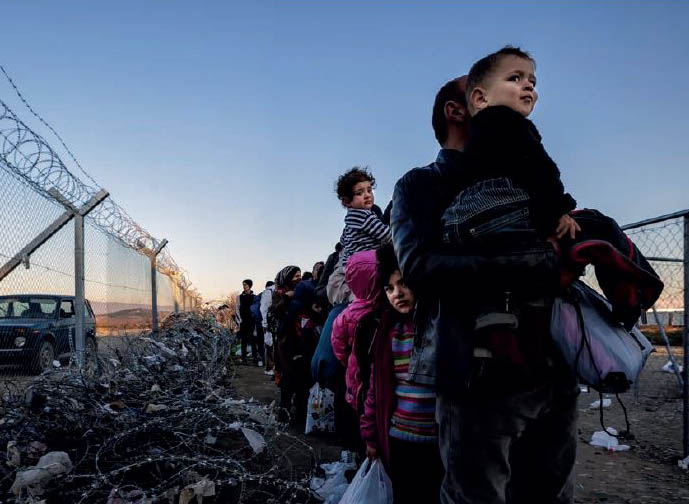 The UN refugee camp is the Moria camp on the island of Lesbos, a hill that descends from above towards the circles of the damned of every war: Yemen, Afghanistan, Iraq, Syria, Palestine. This is where the powerful should come to see for themselves what effects a stroke of the pen has on the lives of others. The block of child prisoners is closely guarded by police. Meals are distributed as in the most organized of prisons: one cage at a time. Naturally, after a few weeks observing the sky through the weft of wire there are those who try to get out of the way, and those who are looking for an anesthetic by gulping down bad liquor or doses of drugs paid for who knows how and, often, at the price of promises indecent.

Covid has only made things worse. Moria was conceived for 3,000 migrants and refugees. There are 20,000: 1 (dirty) bathroom for every 160 people, 1 shower for every 500, 1 water source for every 325.
There are currently over 70 million fugitives worldwide due to persecution, conflict, violence and human rights violations. Of these, "more than 20 million - recalls the UN High Commissioner for Refugees - are refugees", over 80 per cent welcomed by low or middle-income countries, with "medical assistance systems, water supply and services less efficient sanitation ». Wherever things go worse, there is always someone who by chance or by mission tries to restore humanity and dignity, where both seemed lost. Like Eric and Philippa. It was 2000, and they were looking for Heaven. It was 2000 when they left the London gray for the blue of Lesbos for good. Him, a past as an administrator and a present as a sculptor and painter. You, musician and painter.

Perfect testimonials of the island of the poet Sappho. Then, one afternoon in 2015, they saw a black dinghy, adrift. Since then, the Kempsons have lived with refugees, and for refugees. Their Hope Projectc right from the name wants to give hope back. The Greek authorities do not look favorably on them and do not fail to put a spoke in the wheel with bureaucratic issues.
Mohamad, 24, arrived from Yemen with his family of eight. The commission will take 12 months to review his application. Too many to resist inside a tent, in the mud and snow. In the heat of summer and slapped by the winter wind. So like others he found a way to be transferred to the mainland and take the impervious route of the Balkan route.

And it is here, at the gates of the continental European Union, that the founding values ​​drown in the swamp of blameworthiness.
Croatia is the gateway to the EU. Thousands have therefore camped in Bosnia, on the border. There are 500 unaccompanied minors in the region, along with around 450 children and their families. In all, a thousand minors, more than a thousand adult males crammed into the tents of the official Lipa camp in Bosnia.

“We were handed over by the Slovenian police to the Croatian police. We were beaten, beaten, our shoes removed, money and phones taken. Then they pushed us to the border with Bosnia, barefoot. Many wept for the pain and for having been rejected ». These are the words of those who had finally seen the road signs in Italian, but he was sent back, along a chain of rejection such as had not been seen since the war in the former Yugoslavia. The photos don't lie. Almost all of them have bruises, scars and abrasions on their torso.
There are those who are now immobile in the Bihac tent city with their legs in plaster, others with their faces completely bandaged.

Investigations by humanitarian organizations and journalists accuse the Croatian government of having ordered crimes against human rights. Zagreb rejects the charges against its policemen and assures it has launched dozens of investigations since 2018.
Until now, no trial. "Perhaps - explains a source from the Ministry of the Interior - the refugees hurt themselves. Or they beat each other up, or they were attacked by traffickers, or maybe they were attacked by citizens walking around armed in the woods ». In short, no one is guilty.