The medicine of happiness 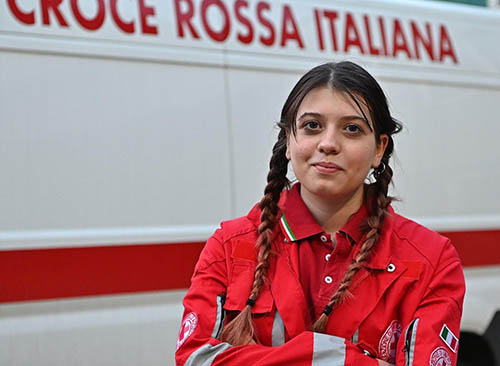 Ginevra Scudiero is a 17-year-old girl, she studies at the Massimo d'Azeglio high school in Turin and is a volunteer in the Red Cross.
It is among the 28 boys and girls, aged between 9 and 18, that the President of the Republic has appointed "Alfieri della Repubblica Italiana".
She herself comments on the appointment with amazement: «They told me that I am standard bearer of the Republic and it is something that I absolutely did not expect.
Before the official communication, before they called me from Turin and Rome, I received a message from a friend of mine, saying: "Don't you have to tell us anything ?!".
It was a bit strange, because I still had no idea. "

The official motivation underlines the passion and dedication with which she participated in organizing the activities of the Red Cross in Turin.
"I have been a Red Cross volunteer for more than two years - says Ginevra - and in the period of the emergency I got very close to a particular service: I took to heart the question of people without income who had to take drugs, maybe even very important for health.
I contacted different people, different associations, different organizations, who passed others on to me; somehow we managed to help many who had lost their jobs and didn't have the money to pay for their medicines ».
The history of Geneva teaches us that good is never the heroism of individuals, but is always a team game.

"I am very proud not only of myself, but of all those people who in this period I have seen actively work and there are so many, so let's say that - being very embarrassed - I consider it a certificate of merit to all the people who are really committed ".
And the other great lesson is that from a very young age you can discover the beauty of doing something important for others, of helping, supporting, getting involved.
We are never too young to discover that the real medicine that makes us happy is to make others happy! In fact, she herself concludes: "The Red Cross has really helped me a lot, it has made me happy."