The hypocrisy of doing 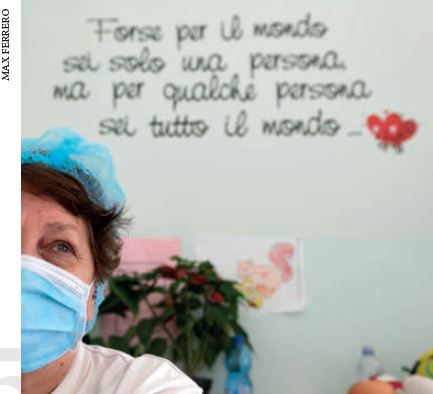 I wonder if the long isolation that has gripped us has turned off our brains, since man is a being of relationship. Instead, I hope it has refined them and made them more capable of grasping the essential, since we all found ourselves in front of Time. Yes, the time that escaped us, that we did not have, that we were wasting, was given to us in its slowness, in its peaceful flow, in the freedom that it has rediscovered in the face of swarms of more or less real commitments, that tied us hands and feet (and head) without leaving us even the possibility of really thinking about them. Everything has stopped relentlessly. No, we have not lost the essential: being able to live, perhaps fighting with new adversaries instead of the usual degrading battles, made up of arrogance, the will to prevail and have or appear.

At first, he expected it to pass and everything to return to the way it was before. Then something changed: we don't know when it will really be over and the wisest of us no longer hope that everything will go back to the way it was before. But we are faced with the great dark fog of: how? It will be necessary to rebuild life and all that it entails personally and in relationships. We have learned to live without others, at least physically and to live new ways of relating, starting from school, up to work, but also discovered that in the poverties that are linked to our being creatures we cannot do without others and even others who risk their lives for us. The whole health field and also many priests showed it to us in strong and dramatic colors, but not only that. Everyone needs a physical meeting, especially children. And we all found ourselves in need of "touching" our fellow men, without being able to do so.

How many things we cannot do, we who have idolized doing! Perhaps it is time to convert our gaze, our thoughts, our hearts. Perhaps it is time to realize that in the need, called duty, of "doing" there is hypocrisy, as the pope said. We know how to color our need for protagonism, vanity, to appear with magnificent colors of goodness and altruistic initiatives.
It is time, in the solitude of our new prisons, to look at the truth and to rediscover a profound coherence between our showing ourselves and our saying, in particular speaking the Gospel. The pope's phrase speaks of "a time of consistency: either we are consistent or we lose everything".
This is what time can do for us, which we have rediscovered as something that is given to us, and not as a spiteful brat who escapes us: to become aware of the urgency of consistency and the reality of our inconsistencies.
Is it tiring, painful? Sure! But it is urgent to be able to live beyond confinement and not putting it like dust under the carpet. "Beyond" means: having taken a step forward in the growth of our humanity, having become aware of ourselves and not only in the illusion of the gaze of others.

Even if today's technology has not closed us in silent solitude, nor in a lack of contact, even if we could see the eyes of others, something escaped, it wasn't there, life was not whole. We found ourselves continually being sent back to a truth other than the one we had tried to express: I don't want to say that it was all deliberately false, but the truth of the person needs not only words, gestures, images, but also a living presence, that fluid. that passes from one person to another without having to invent it and that also passes when we want to hide it.
This strange "fast" strips us and frees us, to make us what we are. Will we be able, then, when everything has passed, to recognize that despite the wounds, the griefs and the sufferings, the Lord did not make us lack the gift of his Life?