The history of Sermig with Mary

Born in 1964, our group up to 1983 never had a fixed seat, from time to time we were guests of the Bishop, other groups or religious bodies. In 1979, the intuition of having a headquarters in the heart of Turin took shape: the military arsenal in Piazza Borgo Dora, a stone's throw from Porta Palazzo.
Starting the negotiations with the Ministry of Defense and with the Municipality of Turin, which was supposed to be our intermediary, we entrusted "this impossible dream" to Our Lady. As Don Bretto, rector of the Consolata had told us, Our Lady had already looked at the Arsenale. On April 26, 1852, a self-combustion fire broke out in a warehouse of the Borgo Dora powder magazine. 24 tons of powder exploded; the dead were 24, in addition to many warehouses, the closest houses were destroyed and the Cottolengo and the cemetery in via San Pietro in Vincoli were also damaged. Quartermaster Paolo Sacchi, putting his own life at risk, tried to prevent the outbreak of the main warehouse (another 44 tons of dust), throwing himself into the flames in the name of the Madonna Consolata. He knew that if the fire reached the dust deposit, that part of Turin would blow up. He managed to stop it in time.
The painting of the explosion of the Borgo Dora powder magazine preserved in the church of San Gioachino is the memory after 50 years from the event and bears the plaque: "in thanks to Verg. SS. Consolata for the preservation of Borgo Dora in the explosion of the powder magazine. 1852 - April 26 - 1902".
Having escaped the danger, Paolo Sacchi went with the employees of the Arsenale and the population in procession to the sanctuary of the Consolata as a sign of gratitude and thanks. Reflecting on this episode we thought that Our Lady would help us too, driven by the desire to bring hope to this tormented city. We therefore decided to invoke her every day by praying the rosary in front of the Arsenale and in the sanctuary of the Consolata. If it was in God's plans, the Arsenal would have become our home ... And in 1983 the Arsenal arrived.
«As I entered the Arsenale - recalls Ernesto Olivero - I thought that the Madonna should have a privileged place. In my simplicity, I imagined her saying to me: I am coming to prepare the way for my son. I talked about it with a man of God and asked him if this intuition could be authentic. He confirmed to me that, just as Our Lady had been an intermediary with men to obtain the Arsenal, now she would be with her son and would prepare the way for him.
I asked him again: "Where can I find a Madonna who is beautiful, who, just by looking at her, inspires prayer and who can also speak to the heart of those who live a traditional religiosity or who even don't believe?".
He advised me to go to Ortisei. So I left with a group of friends. We did not have an address, but the great desire we had in us guided us. I entered the town church, as if to say: if I take a Madonna away from this land, the landlord must know. Finally we enter a shop and find "our" Madonna. After a few days I go back to the car to pick it up. On the way back, I extend the way to Rome, to the pope. The pope blesses her absently. Then retrace his steps and admire her very calmly.
I travel for the second consecutive night. Back in Turin, I visit Father Pellegrino hospitalized at Cottolengo. I'll show him the photograph. I don't tell him anything. He blesses her with a trembling hand. The next day Don Piergiacomo, his secretary, sent me a letter in the name of his father and a check for a million. They seem like the travel expenses! 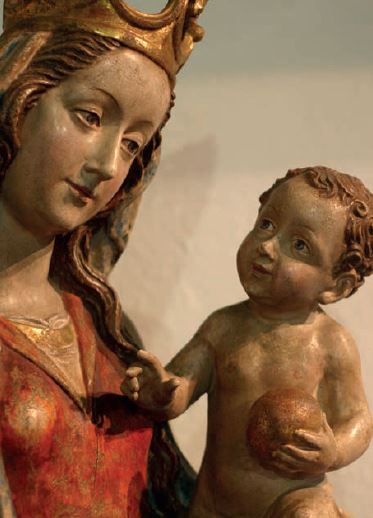 Our Lady was speaking: a few years later, during the celebration of a Mass, Cardinal Saldarini of Turin left the Eucharist in the tabernacle of the Arsenale chapel.
Back home, Our Lady, whom we call "Mary Mother of Men", had found a place in the small chapel. She has become its guardian, placed at the entrance as in the act of welcoming those who enter and accompany those who leave. Even now that a cast iron tabernacle, formerly the mouth of an oven of the ancient arms factory, guards the Eucharist, Mary is a presence to which everyone turns for a greeting, a prayer, or to leave a note in the box at her feet. with a name, a photo of a friend who is no longer there. On the wall next to her, a prayer:
Hail Mary, full of graces
we entrust
to your mother's heart
these our hopes.
Present them to Jesus,
intercede for us.
We asked Pietro Cavallero, the famous bandit of the 60s, a guest for the last period of his life at the Arsenale, to paint it. A symbolic way to express his repentance also visually, already highlighted in other ways, such as the decision to donate the proceeds from the sale of his paintings to children in difficulty.
During the Jubilee of Peace in 2000, John Paul II shared his love for Our Lady with us, allowing us to call her with the new name of Mary Mother of Youth, as in the prayer we recite every day. 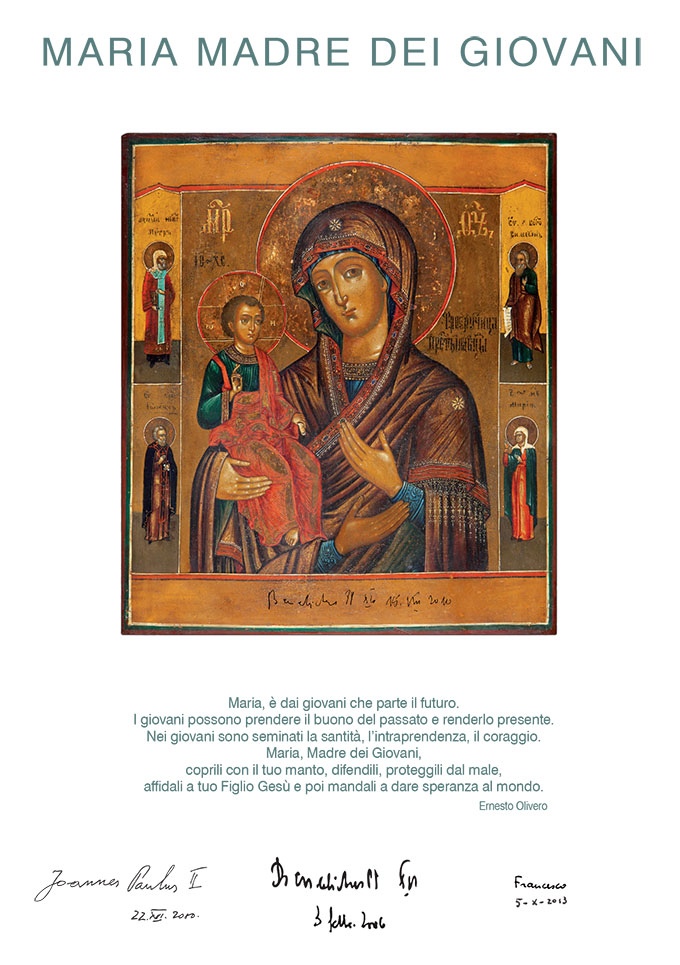 Maria,
the future starts with young people.
Young people can take
the good of the past and make it present.
In the young they are sown
holiness, resourcefulness, courage.
Mary, Mother of Youth,
cover them with your mantle, defend them,
protect them from evil, entrust them to your Son Jesus
and then send them to give hope to the world.
John Paul II and later Benedict XVI and Pope Francis signed it. The face of the Mother of Youth came in 2010 from Orthodox Russia. It is a nineteenth-century icon known with the title of "Mother of God of the three hands".
Mary Mother of the Youth is venerated in the church dedicated to her in Turin at the Arsenale of Peace, in San Paolo (Brazil) at the Arsenal of Hope and in Madaba (Jordan) at the Arsenale dell’Incontro, with the blessing of Pope Benedict XVI. The bishops of Turin, Sao Paulo in Brazil and Madaba in Jordan wanted to link August 2 - the day of our entry into the Arsenal - to the solemnity of Mary, Mother of Youth.
Share on social media