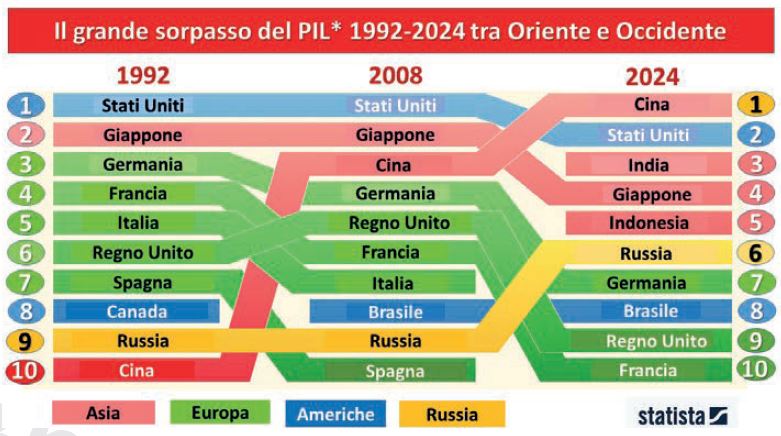 Everything is going as planned. And the great shift of the world axis from the West to the East is by no means just economic. In 2020, Asia's GDP exceeds the GDP of the rest of the world combined. By 2030, the region is expected to contribute roughly 60% of global growth. Asia Pacific will also be responsible for the vast majority (90%) of the 2.4 billion new middle class members entering the global economy.

According to data from the World Bank and the International Monetary Fund, in 2024 Asian countries will be among the top five countries in the world by size of GDP in 2024, relegating European economies to lower ranks. China's economic growth has been blazing fast since the 1990s, while India and Indonesia have entered the ranking of the ten largest economies in the world even more recently and are expected to reach the third and fifth largest by 2024 (see graphics).

At the same time, Japan, a well-established economy, should remain in fourth place, while Russia will rise to sixth place. The burgeoning Asian middle class is one of the reasons for the continental shift in GDP. While China was the most astonishing case for market growth in the 21st century, the country also has a rapidly aging population and therefore holding back growth.

But in Indonesia, the Philippines and Malaysia, employment will continue to grow in the coming years, driving the rise in average disposable income. Almost everywhere in Asia, rapid growth also brings a number of problems, such as a growing gap between rural and urban incomes, major challenges to environmental sustainability and governance, hitherto based more on education, health, efficiency and competence than not on democracy and human rights.