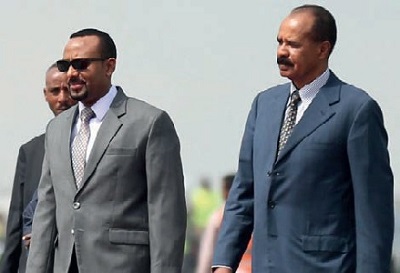 Twenty years ago the exodus of an African people forgotten by Italy and yet inextricably linked to our country began. Last September 18 was the anniversary of the arrest in Eritrea of ​​political opponents and critical journalists in the against the one-party regime led by president Isaias Afewerki. Their fault? After 10 years of independence and two years of war, ask to turn the page, applying the constitution, establishing a democratic system with free elections. Nothing more has been heard of them.

The date was not chosen at random, Afewerki took advantage of the global shock of the 9/11 attack on the Twin Towers to transform his country - the former primeval Italian colony that he had also led into a victorious war of independence from Ethiopia not even 10 years earlier and then led into a disastrous war against Ethiopia itself from 1998 to 2000 - in a dictatorship by closing all independent media. Six years later he cracked down by closing the university and expelling all foreign NGOs and younger missionaries.
Obsessed, like Pakistan, with India, with Ethiopia where the Tplf ruled until 2018, the leading party of the nearby regional state and brother of Tigrai (the dominant ethnic group, the Eritreans of the plateau where the capital Asmara is located, are tigrini), the Eritrean totalitarian regime has transformed the country into a state barracks with a lifelong military service from 17 to 50. It is the state that decides what the citizen's studies and jobs will be, as in communist regimes, because he ideology of the one-party regime is of the Maoist mold while the obsession with controlling citizens, spied on and arrested at the slightest hint of dissent, is Stalinist.

This total absence of freedom, the impoverishment due to the nationalization of private property, the means of production and even the lives of citizens and the embargo to which Eritrea was subjected after 2008 for training and armed the Somali Islamic terrorists of Al Shabaab, plunged the thriving former Italian colony to the bottom of the development rankings. Another record for Eritrea, the last place in the Reporters Without Borders press freedom index. Since 2001, an unprecedented migratory flow from Eritrea has begun, a mass flight of young people. Many Eritreans went to Africa, others tried to reach Europe through Gaddafi's Libya until the end of the 2000s. Then after the agreement to block migrants with the Italian government then led by Berlusconi, they tried to pass from Egypt and then from Israel passing through the Sinai desert where, however, began the kidnappings of sub-Saharan migrants by gangs of Bedouin marauders who demanded very high ransoms, killing and harvesting the organs of those who could not collect enough money from relatives contacted by bandits while torturing relatives. At the beginning of the last decade that infernal mechanism of kidnappings and trafficking moved to Libya after the fall of Gaddafi, always seeing the Eritreans as victims. Two examples. The 367 Eritreans who died in Lampedusa in the shipwreck of October 3, 2013 departed from Libya. And half of the almost one thousand deaths of the overflowing fishing boat that sank on April 18, 2015 were Eritreans. Eritrea has thus lost about a fifth of its five million inhabitants in 20 years and lives mainly on remittances. I was lucky enough to visit Asmara for three days in December 2018 in a crack of opening after the peace wanted by the Ethiopian Prime Minister Abiy Ahmed. It was and is a small, wonderful suspended but sad city. Without young people and adults, only the elderly and minors. The others have fled and are fleeing wars - the last against the Tigris - oppression and misery, daughters of the dictatorship.