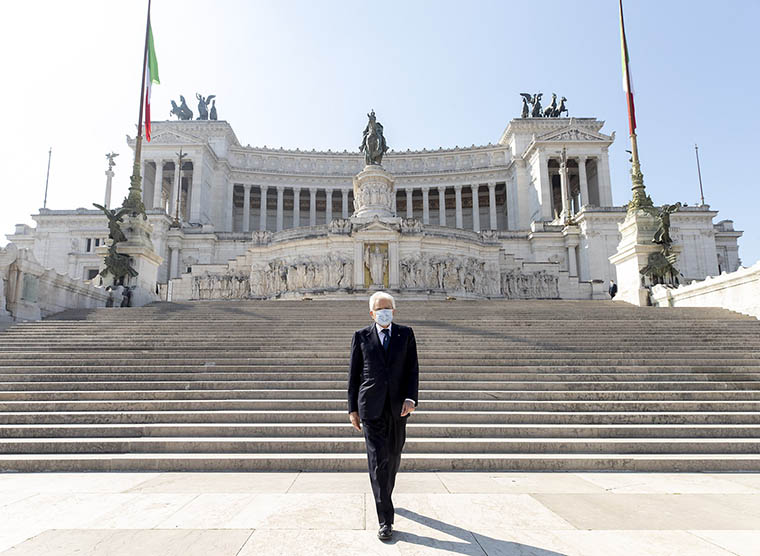 The symbolic image of Sergio Mattarella's seven-year presidential tenure will remain that of him, alone, descending the white steps of the Altare della Patria, on April 25, 2020. The mask on his face, the white hair, the solemn and light step.
In that dignified, solitary descent there was the anguish of a country crushed by the onslaught of the virus; and at the same time the hope of a resurrection.
The meek and severe man who represented us all, silent, proclaimed the resistance of a people to the most unprecedented challenge.
Recalling another lonely walk under the storm: a month earlier, Pope Francis in St. Peter's Square, desperately and brightly silent and deserted.

That April 25 we all clung to the President with the mask, like a raft tossed by the waves. We knew he couldn't do anything. But the mere fact that he was there - solemn solemn serene - despite the cowardly aggression of the virus, gave us comfort and confidence.
He carried on his shoulders the tremendous weight of a country wounded by an unexpected and unexpected assault. He took everyone by the hand, a caring father, not abandoning anyone in the moment of trial.
Never before has Sergio Mattarella been president of the Republic like that day.

Never as in that mild and powerful gesture, solemn and light, mute and solitary. As if to say to sixty million Italians, one by one: «Do not be afraid, I am here, in the most sacred place of the nation, to testify that once again our people will rise again.
Today we are in mourning and crying, but the smile will return.
The story does not end, we are the story.
We have touched these painful days, these agonizing deaths, which we must never forget, but honor with appropriate behavior. However, if we are a people, if we are united and generous, if we reject selfishness to look at the other, we will rise again. I promise you from here, from this Altar of the Fatherland, severe and solemn, which contains the meaning of our common destiny ».

After all, Sergio Mattarella had said this since his inauguration speech on February 3, 2015: «We do not need generic exhortations to look to the future but rather the tenacious mobilization of all the resources of Italian society.
Speaking of national unity therefore means giving the country a horizon of hope.
In order for this hope not to remain an abstract evocation, it is necessary to reconstruct those bonds that hold society together ".