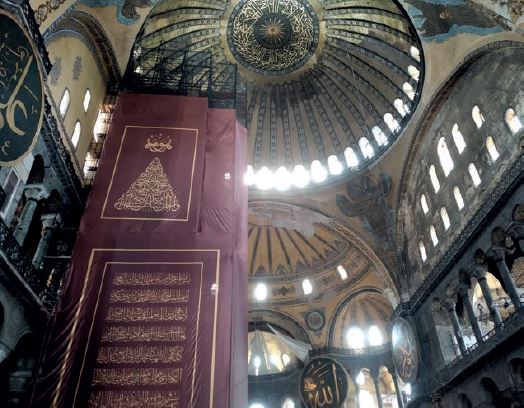 Rivers of ink have been written about the recent conversion of Hagia Sophia, an ancient Byzantine Christian basilica and absolute masterpiece of architecture of all times, to Islamic worship. What is surprising is that, almost 1,500 years after its foundation, lively debates continue on this building regarding the exclusive use of its religious use and the powers that, more often, interfered in this use, to make it symbolic place a reference of self-referential prestige. However, how many have really seen this masterpiece and, seeing it, have been able to contemplate in silence the beauty that emanates from the daring forms of an architecture that has been ahead of its time, and from the decorations, tangible testimony of cultures, sensitivity, knowledge and craftsmanship sometimes very different but in any case of absolute excellence?
On May 29, 1453, when after days of siege, a breach was opened in the Theodosian walls of the city of Constantinople and the Ottomans broke into the second Rome, the conqueror, Mohammed II, went on horseback without hesitation right towards Santa Sofia.

He had often heard of it in enthusiastic terms: that was the symbolic heart of the city and in it the handover between empires with universal claim and divine legitimacy, from the Byzantine to the Ottoman one, had to be consummated. The chronicles say that the Sultan, therefore accustomed to the conquests and occupations of cities and art treasures, got off his horse, amazed and subdued by the splendor of Santa Sofia, so much so that he hit a soldier of his own who, blinded by fanaticism, raged against the marble floor, shattering it. If that place was iconographically incompatible with an aniconic Islamic context of prayer, the extraordinary aesthetic attraction it exercised could not be eliminated, imposing an ecstatic respect with its beauty. Many people have asked us whether it is not normal for believers to hope that a place of worship, instead of being a museum (as Mustafa Kemal Atatürk had done for Santa Sofia since 1934), can return to its ancient cult function. The observation is not trivial.

But what to do when, in the impossibility of an inter-religious and inter-ritual use (we have never considered it a realistic perspective for the Istanbul masterpiece, also given the unfortunate precedents, such as that of the Basilica of the Holy Sepulcher in Jerusalem ), would a specific cultic orientation still lead to a wrong to a party that historically has been able to benefit from a place of worship that spans the centuries (as in the case of Christians in Santa Sofia)? It is here that we need to shift reflection to another dimension, recovering the importance of preserving places that "elevate" man to the mystery of a Transcendence that summons and does not divide. We cannot forget that beauty, as an experience and not a simple idea, is a prerequisite for a spiritual encounter! Beauty makes us feel that there is "something more" behind things: it is like a glimpse of beyond, of mystery, of infinity.

Beauty is holy because it is bread that nourishes the quality of life, and this regardless of the faith to which it refers. The problem is understanding what we feed on. The risk is when we eat poisoned bread: feeding on selfishness, intolerances, myopia of the spirit, the senselessness of living, superficiality, fears. If we welcome thoughts from the slums of life, they make us like them, unable to elevate ourselves and selfish kidnappers of beauty. If, on the other hand, we welcome thoughts of beauty, they make us men and women of beauty: ready for the encounter with the dazzling beauty of God, like someone who, admiring an extraordinary panorama, is only concerned about immersing himself in it and certainly not hiding it from the sight of others!