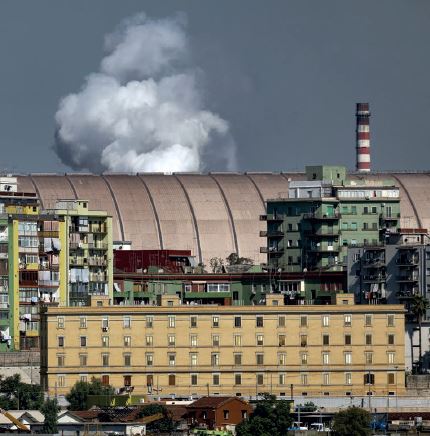 From Corso Due Mari you can observe an unparalleled landscape: to the west the Ionian Sea from which the Spartans who founded the city in the eighth century BC arrived; to the east, the small sea: an internal salt lake with fresh water springs, excellent for the production of mussels of high gastronomic value; to the north, the old city, located on an island that divides the two seas, is a cradle of history and abandonment, then further up, beyond the Punta Penna bridge, begins the Tamburi district, a residential area until the years' 60, now a symbol of decay at the foot of the "monster", as the former ILVA steel mill is called in these parts.

The chimneys that protrude from the roofs due to the perspective crushing continuously emit a light smoke that is not very disturbing. They tell us that as soon as the sun sets, production increases and, with it, emissions too.
Every now and then there is a white puff; water vapor, they say, determined by the use of the waters of the small sea to lower the temperature of the blast furnaces in some stages of production.

The white vapors dissolve in a few seconds, but its content plummets, right there in the neighborhood where on windy days children are forbidden to go out. Right there where the anti Covid ministerial decrees have already been applied for some time to escape the sea of ​​pollution. Sea ... yes, because there is no longer anything that is healthy in Taranto. Throughout the city, the incidence of cancers on children is 35% higher than the national average, young people are asked not to play in the fields or in the parks of the Tamburi district because the earth, which sticks like metal to magnets, penetrates in the pores by introducing heavy metals that make sick, plague, contaminate.

Mothers are asked not to breastfeed because they are contaminated with dioxin, as well as the land around the steel mill for about twenty kilometers, as well as the small sea and all the production of mussels that the city once boasted of. False civilization has conquered the old Spartans by promising a permanent job and giving them only a fate of precarious health.