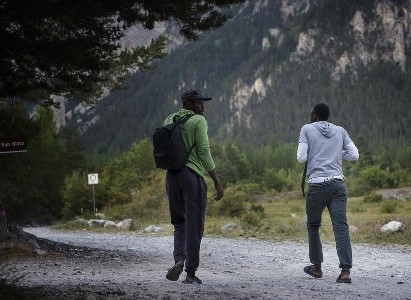 Piero Gorza caused a sensation in many media because he opened a house to migrants who arrive from the Balkan route to Oulx to try their luck in passing through France. The angel of migrants, as it has been defined, mostly follows families even with small children who sometimes make it through France, sometimes they are rejected with methods that have nothing to envy to the Croatian policemen on the border with Bosnia. His friend Piero could be denounced for his welcome and assistance. Just as the French farmer Cédric Herrou was denounced for having helped many and many migrants in Ventimiglia, on the border with Italy. Finally the French Court of Cassation acquitted him after almost 5 trials in 5 years. Brave and clear-headed man he and his lawyers. A precedent in Europe. Yes, because even on the route to the Balkans at the door of Europe, the Community abdicates the respect for rights that made Pietro Bartolo, a doctor from Lampedusa, now a MEP, say, "I had never seen such an inhumane situation in Lipa" and in Nello Scavo, a journalist of Avvenire, under police protection after the threats for the investigation into the Libyan human trafficker Bija, «Europe has signed up in Lipa, Bosnia». In these days, however, we can also register good news: the first is the lightning mission of the Minister of the Interior Luciana Lamorgese in Libya to propose the opening of humanitarian corridors in the context of bilateral cooperation. The second relates to the fact that since 19 April we 446 million European citizens will be able to connect to the multilingual digital platform in Brussels, the interactive tool launched in view of the conference on the future of the Union, which will officially open on 9 May.

Also for this purpose, the 23 Retinopera organizations want to make this Appeal to the European Parliament:
1. Strengthen and make binding the social pillar of the Union by promoting the values ​​of solidarity, dignity, social justice and respect for human rights, seeking and including shared and sustainable solutions of protection and salvation for those who suffer and die "at the door of Europe" and which entrusts its life to a hope placed precisely in our European community;
2. Proceed as soon as possible to the reform for a European asylum system shared and in solidarity among all member countries. There are no alternatives, when one Member State is under pressure, solidarity and a fair sharing of responsibilities must be triggered among all other Member States;
3. Protect the rights of migrant minorities against all forms of xenophobia and racism, by supporting more vigorously civil society programs aimed at integration initiatives throughout Europe.

Thanks Piero. Thanks Cédric. Thanks Luciana. Courageous. Builders of Peace.