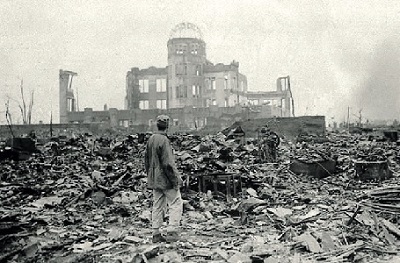 There is now no place in the world for nuclear weapons. It's forbidden to have them, not just use them. So it is written in the UN Treaty approved by 122 nations in the General Assembly on 7 July 2017. And it entered into force on 22 January, 90 days after the 50th ratification of Honduras. With all due respect to the fragile balance guaranteed by the doctrine of deterrence. And also of the more than 1,300 warheads closed in the arsenals of the atomic club: USA, Russia, China, France, Great Britain, Pakistan, India, Israel and North Korea.

The nine powers - and their allies, including Italy - are not part of the agreement which does not currently apply in their respective territories. They will not, however, be impervious to its effects, as the history of disarmament demonstrates. Even without adhering to the ban, for example, the United States has stopped manufacturing cluster munitions while 34 countries have frozen the movements of anti-personnel mines. Moreover, prohibition treaties tighten the credit taps: financial institutions often choose not to invest in "controversial weapons". Abp, one of the five largest pension funds, has already closed to nuclear producers. The treaty, therefore, represents a strategic Copernican revolution. "A turning point", defined it Beatrice Fihn, coordinator of the International campaign against nuclear weapons (Ican), the movement promoting the initiative and awarded for this the Nobel Peace Prize in 2017. It is the "first legally binding instrument that prohibits explicitly these devices, the use of which has an indiscriminate impact, quickly affects a number of people and causes long-lasting damage to the environment, "said Pope Francis on the sidelines of the general audience on January 20. And he added: "I strongly encourage all states and all people to work with determination to promote the necessary conditions for a world without nuclear weapons, contributing to the advancement of peace and multilateral cooperation", which humanity so badly needs. .

An appeal repeated several times by Jorge Mario Bergoglio. "The use of atomic energy for war purposes is, today more than ever, a crime, not only against man and his dignity, but against any possibility of a future in our common home,” he said on November 24, 2019 at the Hiroshima Peace Memorial. The "total elimination of nuclear weapons becomes both a challenge and a moral and humanitarian imperative", reaffirmed in the encyclical Fratelli tutti. It is not surprising, therefore, that the Holy See was the first state to sign the UN ban. And his moral suasion has helped to sensitize world public opinion on the urgency of "integral disarmament".

Built through global concert work. «It's a new era. What is more, non-nuclear weapon states can now use legal leverage, as well as financial pressure to promote the goal of a world free from nuclear arsenals. We are under no illusion that moral declarations alone lead to disarmament, but the change in the norms will hopefully promote the start of negotiations to this effect», underlined Cardinal Silvano Maria Tomani, member of the department for service to the
integral human development, with a long diplomatic career as a permanent observer at the United Nations in Geneva.

Something is moving in the international scenario. The new US president, Joe Biden, has repeatedly promised a return to multilateralism after the tears of the Trump era. «The muscular and divisive approach of the latter has dealt decisive blows to multilateral diplomatic relations. These go beyond the topic of nuclear disarmament but, probably, in no other field are they so necessary. I am thinking of the discontinuation of the Intermediate-Range Nuclear Missile Treaty, which was a cornerstone in the European security architecture.

President Biden has shown a willingness to return to a cooperation strategy. Start In terms of regional agreements, even these compromises from the Trump administration, Biden could rejoin the Iranian nuclear deal. And start, as announced, a concerted and strategic campaign - with his allies and not, including China - in favor of a nuclear-free North Korea,» Cardinal Tomasi reiterated.
Besides the big ones, the commitment of civil society against nuclear power is growing. According to the latest survey by Ican, more than 80 percent of the population in Belgium, Spain, Iceland and Denmark support the ban. In Italy, even 87 percent. Hence the strength of the Italia rethink it campaign, led by Italian Peace and Disarmament Network (Ripd) and Senzatomica. «We foresee a path of positive steps towards this goal.

It will be introduced first a parliamentary question for our government to participate, as an observer, in the first conference of the states adhering to the ban - explains Francesco Vignarca, Ripd coordinator -. We will also ask for effective participation in the humanitarian programs in favor of the victims of nuclear tests foreseen by the Treaty».