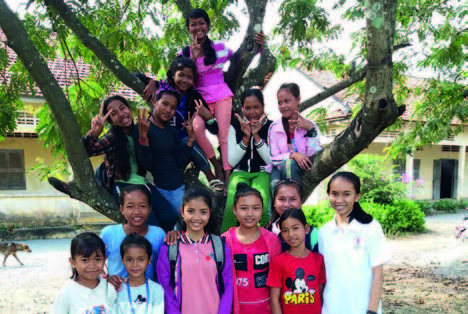 Also for school and human growth projects - which we promote in Vietnam and Cambodia together with the FMA sisters to allow boys and girls access to school - the health emergency, there too, has caused the great contradictions of society to explode where, between inequality and social exclusion, poverty is always the greatest threat to health. In both Vietnam and Cambodia, more or less acute periods of emergency alternated. The health situation, however, is perhaps the least serious.

Vietnam is now a competitive production site compared to China for an even lower labor cost; also in 2020, leading international and even Chinese investors moved factories for export. However, it closed as soon as the drop in foreign demand and trade difficulties hit production volumes. Families who barely live "for the day", such as day laborers, general workers, employees in odd jobs, suddenly found themselves unemployed and without money. Schools were closed in the first months of the epidemic; then reopened, with many precautions. In this scenario of crisis, a school that is closed to many can then be closed forever: a downhill road to a future of misery. As Sister Elena Miravalle tells us, the answer was the network of solidarity communities that has been built over the years. «Then charity took shape. Parishes still distribute one meal a day. We have brought aid to 1,500 families, the most disadvantaged, those who live in the shacks on the edge of the river, the ethnic groups of the suburbs. Among these families there were also "your" boys. For many of them being out of school was a trauma, so the sisters "invented" ... They gathered small groups of students for occasional lessons, according to the possibilities. They invited upper-grade students to take care of lower-grade children, giving lessons especially on Sundays, as small churches far from the city have not been closed entirely. Now that the schools have reopened, the commitment is to bring the pupils to make up for lost time, to prepare for exams… ». The children supported in their studies are, as always, very responsible. Some have reached the end of their cycle by finding work. Some families have less need for help, and spontaneously leave it to others, who are never lacking.

In Cambodia, the abrupt closure of tourist circuits quickly joined the blocking of production activities for export, leaving behind what were sources of livelihood for many people. The challenge was to keep the Vocational School's service ready for recovery today and to help the 160 young women attending it, their poor families, and others in the time of closure. The project of the "street speakers" that we support, a new experience where the students of the Professional School of the Sisters offer their service to the community in the territory by animating participatory educational activities for groups of children and young people in the suburbs, about 600, had to deal with the limitations of the pandemic. The country today has become even more impoverished, school support and action programs in the suburbs are and will be, if possible, even more important. Love finds its way, experiencing encounters, and transforming them into relationships, into life.