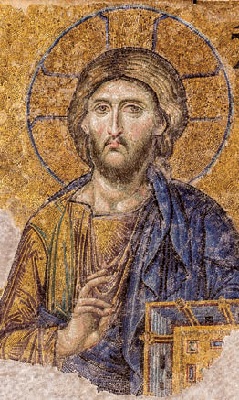 This fantastic mosaic of Christ blessing is located in the Cathedral of Saint Sophia, and despite being damaged in the lower area, it remains visible enough to be recognized as a masterpiece. It also includes two lateral figures: the Virgin Mary on the left, of which only the face remains, very refined, luminous but also swollen with tears, and John the Baptist on the right, dry in his austerity but turned with deep respect and love to the his Friend, the Bridegroom, of which he was a precursor.

Both are addressed to Jesus Christ in an act of supplication and intercession for humanity, towards his infinite mercy. Together they form the deesis, which means, in fact, supplication. It is located in the central span of the south gallery of the cathedral, and is part of the mosaics and decorations made in the era of the Paleologians, after the liberation of Constantinople from the Latin occupation, between 1260 and 1300 approximately.

The church of Santa Sofia was founded by Constantine and then destroyed by a fire in 532. It was completely rebuilt by Justinian in less than 6 years. And subsequently it underwent other interventions, including the construction of the huge and famous dome, 54 m high!
The decoration of the basilica of Justinian was made of marble slabs of various colors and figurative mosaics, which were irreparably damaged first during the iconoclasm and then during the occupation of the Latins of Constantinople. Then they were taken up and renewed later. In 1453 the Turks occupied the city and transformed the basilica into a mosque, destroying many mosaics and covering the others with plaster and lime. In 1935 the mosque was transformed into a museum and, finally, it was possible to start the restoration work thanks to the Byzantine Institute of America, and to bring back the previous mosaics and decorations.

If we look carefully at these faces, in particular that of Christ, we doubt that perhaps even the very hostility of an "invading enemy" who comes with the precise intention of annihilating the previous religion, is not succeeded in destroying these images entirely, but stopped and limited herself to covering them. In such a way that the restoration was then possible.
Singular how they have reached us through the centuries, through various vicissitudes. Still with their message, still with the freshness of a look that disarmed, wants to meet us. In fact, what is most striking about this face of Christ is the extreme sweetness and calmness, albeit in a serious and majestic expression, which speaks to us of mercy, of understanding of a God who became man for our love, of a God. very human, really in love with us.

Christ is depicted according to the typology of the Pantocrator certainly in full figure, but it is not known whether he is enthroned or standing, his robe and club are covered with light gold while the himation is typically blue. His left hand holds the Book of the Word and his right raised in an eternal gesture of blessing.
All depicted with great refinement in the composition, delicate shades of color, the small size and the skilful positioning of the mosaic tiles. Elements that make this work a masterpiece.