Mother of God of the Don 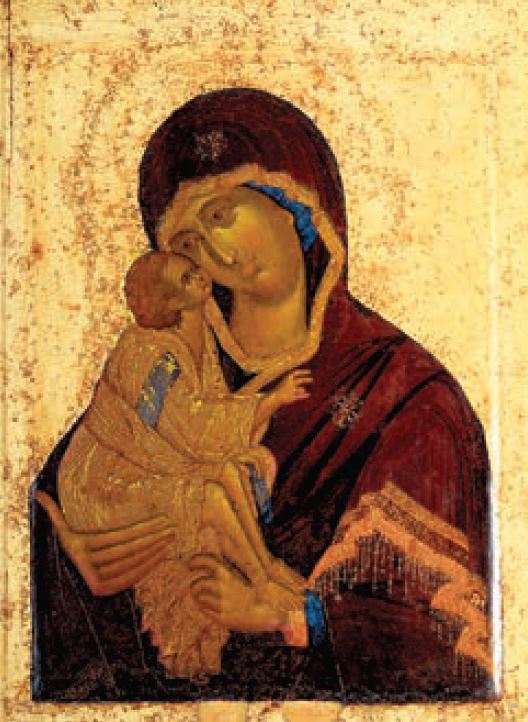 In this month of May, the month consecrated to Mary, we look at an icon of refined beauty dedicated to her, from the fourteenth century, attributed to Theophanes the Greek.

She belongs to the iconographic model of Tenderness, where her mother and her son touch each other's cheeks in a silent and profound exchange of love. But it has its own characteristics. It takes its name from the Russian river Don because tradition says it was made to celebrate the victory the Russians won against the Tatar invaders in 1380.
Instead, it is claimed that she was present among the soldiers on the battlefield even before the same victory. Moreover, it is well known that icons were part of the life of Christian communities and were present in the most important moments of their history, which were carried in procession, wrapped in prayer, to avert dangers, natural disasters, invasions ... and not infrequently they came brought "into the field" by the army precisely to beg for help and ask for victory against the enemy. In fact this is a processional icon, which on the back shows the dormition of the Virgin and her name has always been linked to that episode. But not only the story is interesting: if we look closely we find some not indifferent details, which distinguish it a little from other types of Tenderness.

The Child, while looking at the Mother in this gesture of great confidence and affection which is touching her face with his, is not clinging to her with his arms and hands, but his right hand blesses and the left holds the scroll of Scripture. , as in the icon of the Pantocrator. This Child is the Almighty, who was incarnated in the womb of a very pure virgin and became man. Man and God. He is also the Word, the Word, the manifestation of God, of his will to man. And he blesses, that is, "continues" to bless, to love man. Another detail are his uncovered and joined legs, in reference - as we have already seen in other icons - to his passion but not only, in fact his feet, tied by gold sandals, rest on the mother's wrist as on a dais , while on the other hand of his mother he is seated, as on a throne.

We can also find this image of the virgin mother as the "throne" of the celestial sovereign in other iconographic models. And not only the mother becomes a throne, but also a chalice that welcomes the Child, a reference to the Eucharist, and therefore to the offering of the child, to her passion. Finally, the garments of the child covered with golden assists indicate his celestial glory, the uncreated light that he emanates and that clothes him. We find the same clothing in Christ in glory among the powers. And the mother? She is queen, mother of the Almighty, mother of God who became man, mother of the Christ of the Passion and of the glorious Christ.
She is silent but very present, all reaching out towards her son, king of her, dressed in gold of Ophir, as Psalm 44 says of the queen.

She who has totally united her life, her will, her heart, all of herself to the son-God, is a very humble queen and a generous mother, our mother too, capable of understanding us because she is a creature, but also of guiding us with security, sweetness. and love towards him.