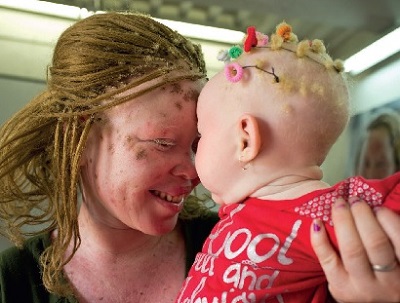 Sometimes in Africa I have had the rare opportunity to photograph some people suffering from albinism, a rare dysfunction that makes the skin pale, the pale eyes melancholy and transparent, and the golden blond hair due to the absence of melatonin which causes skin cancers and blindness. Talking with them leads to a state of enrichment and privilege, as well as bewilderment due to their awareness that makes them survive in a perpetual state of resignation.

In a gallery in Accra (Ghana), I meet Bernice (in the photo with her daughter), an albino model present at the exhibition of her portraits commissioned to an accomplice photographer with the aim of raising awareness among the indigenous population who, after all, like many others scattered on the African continent, they remain deaf in the face of this terrible discrimination. Her story is similar to that of many girls like her afflicted with this rare disease. She seems serene when she tells me about the wrongs suffered during the course of her young life starting from childhood.
"At school I was prevented from taking lessons," she says, "so I had to stop going for two years and in the end, when I returned, I was forced to pay another student to take notes for me: the teacher. he didn't want me to look at the blackboard! Then on the bus they addressed me with obroni, or ofri dialectal words that mean different, white man. The fact is, no one sits next to you. As if I had the plague ».
She is not ashamed to show her scars, the most painful ones inside, the consequence of years of prolonged exposure to the sun.

"We are the object of superstition and derision, we are seen as aliens or worse ghosts and we all have the terror of disappearing, and the bitter awareness of not being able to have great aspirations for life". Starting from birth the difficulties begin, with the conviction that the albino baby is a curse that will bring bad luck to the family. Mothers often feel guilty or are even abandoned by their husbands who believe the baby is the result of a relationship with a white man. It is not uncommon for newborns to be killed to avoid this.
As I discuss with her, I suddenly remember that I have never met anyone on our streets similar in appearance to her, in the midst of the many migrants who have landed on our shores in recent years. An atrocious thought, however, assails me: probably if they were intercepted aboard the makeshift boats that shuttle between Africa and Europe, they would be torn to shreds and thrown to the fish for fear of having a bad luck on board, I think.

The children of the moon are people deprived of the possibility of generating their own shadow. Sunlight, if it decides to invest them rather than heat, shape and generate as it usually does with anything on this earth, pierces and kills like a powerful weapon, like the atomic bomb does. What if the word albino that distinguishes them was instead used as a term to determine a new dawn? The acceptance of a new African man.