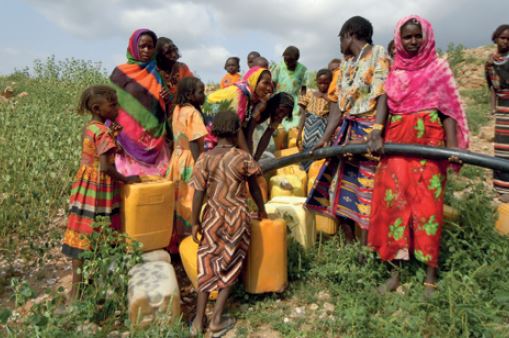 The news that arrives is always scarce; even if in recent months the region has had to face a new terrible crisis that the peace reached in 2018 between Eritrea and Ethiopia seemed to have archived forever. The conflict that arose between the Tigray region and the Ethiopian federal government immediately ended up also involving neighboring Eritrea and in a scenario of already strong precariousness, poverty, and food insecurity, a war is the last thing there can be. need.

It is not the only emergency that is experienced.
For years the country had been kept in a state of almost total isolation from the rest of the world, but since the first announcement of the pandemic thirteen months ago, although the health situation is not serious, the civil and military authorities have resorted to isolation total of the country from direct and indirect connections with neighboring and non-neighboring countries, by air, land and sea. The same excludes internal movements between region and region, city and city.

Places of worship such as mosques and churches, schools of all levels, public places of productive and commercial activity, including grain markets and shops for basic necessities, still hermetically closed, with only modest signs of loosening.
As everywhere in the world, the economic and social consequences of the pandemic are very serious.
Children are the most immediate victims of this fatality, with two lost school years, isolated in homes, and tried by poverty and health and food shortages.

Unfortunately, the invasion of locusts regularly arrived last October-November, to the detriment of the already poor seasonal harvest; phenomena that can at least in part be controlled and reduced, but by investing resources and coordinating at the regional level.
The heavy damage contributes to a particularly critical moment of food emergency. The international community is largely indifferent to the condition of the country and its people. The fact that in recent years has occasionally reported the Eritrean situation in the news, it has been refugees who come there, especially young people, fleeing military service for life, for a long time a considerable flow in relation to the population.

Since last year, however, Europe has hardly welcomed those fleeing a country "at peace", while for months the regional conflict has made it impossible for the previously continued flight to Ethiopia, from which refugees are now forcibly repatriated.

In this very difficult and complex scenario, it is even more important to continue to develop the vital initiatives which, mainly with the Capuchin Fathers, widely present among the people, have been underway for a long time. Projects on the most urgent needs in the villages: small photovoltaic systems, sewing workshops, safe water for consumption, making more crops possible for the sustenance of communities, arranging local infrastructures, supporting schools, kindergartens and initiatives with children and young people.

Today we add the urgent need for aid for those most affected by the heavy economic and social emergency induced by Covid.
Good results have already been achieved so far. And the common desire to implement as soon as possible everything that can be done from time to time between the various initiatives in the pipeline is even stronger.