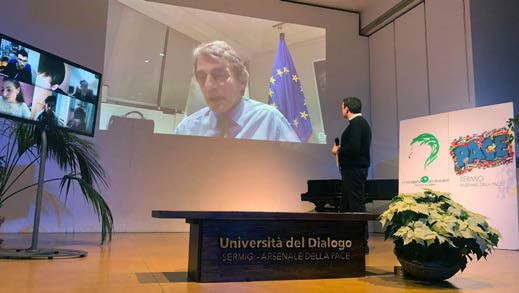 We had known and esteemed each other for many years, from an evening in October 2008 when we asked him to moderate a confrontation between politicians from all sides and personalities from the economic world regarding the serious global financial situation then underway.

A bond of friendship that has been renewed over time and resulted in the comparison - this time virtual due to covid - of December 2020.

David, as the countless people who have remembered him in various ways after his untimely death have pointed out, was truly a man of dialogue who raised the name of Italy in Europe.

Speaking of the future of Europe, we report his calm words full of realism, but above all of hope.

«The crisis will be very deep, long and tiring and we will have to try to make it as less dangerous as possible. The European Union is there for this ". The President of the European Parliament David Sassoli goes to the heart of the problem: the pandemic is a point of no return, its effects will be felt for years. In such a delicate context, the continent's common horizon becomes even more important. After a few months of uncertainty, the European Union has deployed tools never seen before to help the countries affected by Covid. For Italy alone, there will be over 200 billion, an opportunity never seen before. "But Europe cannot be just an ATM," says President Sassoli. “Resources are certainly important, but they are not enough. We have to start from our values. The world needs this ».

“We all have a responsibility to others. We all need to feel part of a common problem. In recent months, European public opinion has realized how the Union has concentrated on seeking answers capable of facing and resolving the crisis.

Each country must feel involved. Also because investments will not come to rain. The money will be given to the 27 member states in different proportions to do two things: start the engine of the recovery of national economies and thus make Europe even stronger and more resilient. In this way the continent will continue to be an instrument of peace. Of course, we cannot impose anything on anyone, but we want to participate in a world that needs rules, because a globalization without rules would only be in the interests of the strongest. I am confident, I believe that if we manage to have more and more common policies internally, this will also have repercussions on international politics. We cannot ignore interests - I say this with modesty but also with realism - we know that European nations do not come out of nothing and we know their history, their positions. However, we are in a favorable moment to think about these issues as well. Let me be clear, we will never be an aggressive giant. Europe will be able to assert its economic weight and make its values ​​available to others, but we will never be a war machine.

This is also recognized to us. When there is a conflict, we know that we can trust the European Union, which is able to make the parties involved dialogue. This is why after 70 years and after having enjoyed an extraordinary season of peace, perhaps we can give something back to the world and we can do it only with this temperament, not with anything else ».

As your children have advised you, “good way”. And thanks for having traveled it with us too. 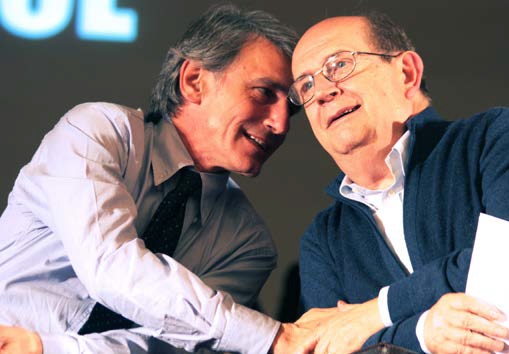 As a Catholic and a layman he followed the path indicated by Don Milani. I met him, for the first time, on the slopes of the Mondovì hills. It was the 90s: there had been a kidnapping. He was a correspondent of Tg1, I of TgR in the service of 2 and 3, then as now "caring for the news".

He was a polite, good and persistent colleague. We shared the microphone for live broadcasts (there was only that!), The tension of the news, the anxiety to inform.

How many phone calls when he conducted Tg1, as deputy director, as a colleague. He was professional, but also ironic, simple, with the vegetable garden of his house in Sutri that he cultivated in his spare time. A wife, Alessandra, met in high school, two children, a passion for journalism, an eye for politics that gave him 850,000 preferences in Europe.

He would have come to Turin and to the University of Dialogue, at the Arsenale of Peace. Covid has canceled everything, leaving only a "link". The last farewell to Turin.

David Sassoli has a long history that unfolds between the news and the lives of others. He is one of those journalists who have never hurt anyone in their feelings, even in very difficult situations. He was simple, one of us, genuine, true, engaging, obstinate. And, let's face it, even when he had big and demanding roles, he never lost his style as a man normally immersed in the world of European power, he never forgot his battles to enter the circle of journalists and, above all, he did not but stopped defending the weakest, the last, the forgotten. And he did it with disarming humility even though he was, and has been, "a thoroughbred" of information. Thanks David! I have seen others lose balance, sobriety, equidistance and mix feelings that are not proper to a journalist. Not him! And it doesn't matter if now, some alleged no vax offends him via social media with phrases that speak for themselves.

Born in the Tuscan capital on May 30, 1956, he attended Agesci, the Italian Catholic Guides and Scouts Association as a young man. His father was a parishioner of Don Milani and he began, as a young man, to work for small newspapers and in press agencies before moving on to “Il Giorno” and then making the big leap in Rai. Florentine by birth but Roman by adoption, he had become a familiar face to Italian families above all for his conducting the Tg of the Rai flagship network, of which he was also deputy director during the era of Gianni Riotta.

The air of the good guy, the look that reflects his choices, always in the center left, has written pages of beautiful information and is part of a season of anchormen that our generation will never forget: these were the years of great turning points. politics, the bursting crisis, the euro and many illusions and he was on TV to browse the events of the world. And he did it very well.