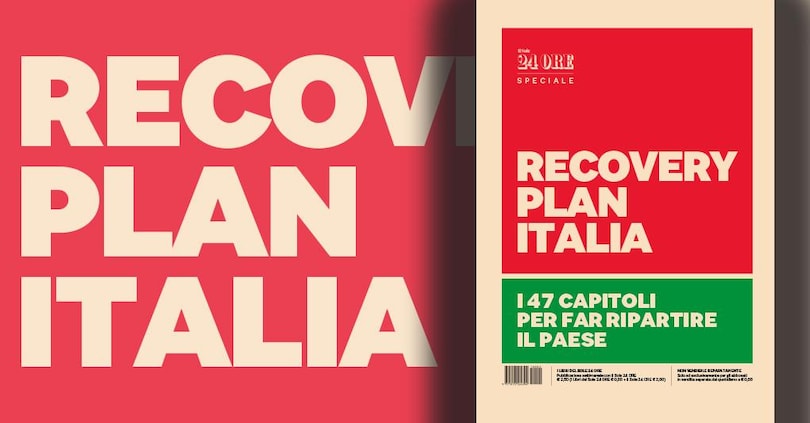 It has been at the center of attention for months and we will still hear about it for a long time: the newspapers and news programs are full of "Recovery Fund", "Next Generation Eu" or "Recovery Plan". The fund approved by the European Union to support the Member States affected by the Covid-19 pandemic represents a great opportunity for Italy to exploit, and to do so, the best must be done because the "National Recovery and Resilience Plan" - which contains precisely the actions and projects to be implemented in practice - is the best possible.
The environment, innovation, digitalization, sustainable mobility, health, work, education, infrastructure, justice are some of the many areas of intervention.
Some of these are configured as real sector reforms, capable of radically changing the approach taken up to now. Many have rightly pointed out that the Plan must look to future generations, thus having a long-term perspective. But this does not necessarily mean that he must completely forget those in the opposite condition, that is the elderly, in particular the non self-sufficient, who, moreover, were the very ones who paid the highest price of the pandemic.
At the level of major social policies, our country has experienced a cosmic delay for decades, in particular with respect to three large categories of people: the poor, families with children and the elderly who are not self-sufficient. With great effort Italy has brought home in recent years (despite all its flaws) an instrument to combat absolute poverty (the Rei then transformed into Citizenship Income), and is about to launch a reform, that of one-time allowance for children, which promises to revolutionize at least the approach to family burdens.
Non self-sufficiency, on the other hand, has remained at stake, and not even the massacre of the elderly caused by Covid-19 has so far led to significant improvements. This is why a group of scholars gathered in the Non Self-Sufficiency network proposed to introduce in the Recovery Plan also a reform that on the one hand includes a plan for the redevelopment of residential structures, to improve the quality of life of the elderly who live in them, and from other than to strengthen home services, extending the health perspective also to the social level. It means a change of pace: thinking that to make the non self-sufficient elderly feel good, it is necessary to help and support those who are his family and who live at home with him. Caregivers and carers included.
Up to now, it is pointed out, politics has paid little attention to the issue because, after all, the elderly who are not self-sufficient have largely thought about their families, often with great effort and sacrifice.
But in a country that is aging more and more, this is a balance destined to collapse and there is a need to think in time about what to invent. Doing it inside the Recovery is a possibility. But in any case, however, this - together with the birth rate theme - will remain one of the most important points of the coming years.
Stefano Caredda
NP March 2021
Share on social media