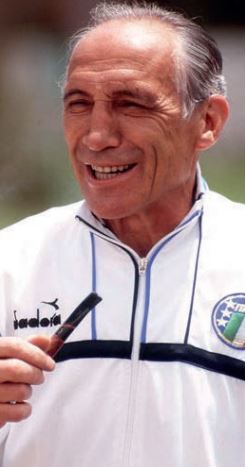 Enzo Bearzot has been dead for over ten years. It seems like a century. Football, the most popular sport, has sold itself to the god of money. TV, scandals, tattoos. Mega-salaries, mega-villas, mega-cars, mega-women. All excessive, all sensational, all disproportionate. Who knows what he would say, the old man, about a ball like that. He, who smoked a pipe, played cards, listened to jazz. Wife (only one), children, secluded life. Sweat on the football fields. Fatigue. Sacrifice. Ten years. A century. They will make forty, next July 2022, from the Mundial of Spain. Won by the old man and his boys. Against everything. Against all.

Him, Zoff, Rossi, Scirea, Cabrini and the others. Massacred of criticism, first. Incensed, praised, sanctified, later. And Bearzot, unperturbed, before and after. The pipe, and the sense of duty. He was right. But he didn't seek revenge. He pampered his boys, took them four years later to Mexico, the miracle did not happen again. And Enzo Bearzot went home. Piero Trellini tells us: «Bearzot, keeping the heroes of Spain for the Mexican Mundial, chose to die with his soldiers. Resigning, he walked away from a kick he no longer recognized. He remained for everyone the symbol of an era to regret, of a football that disappeared forever.

In the homeland of the opportunists he took no advantage of the Spanish enterprise which made him and his pipe the icon of at least three generations of Italians. After the adventure in blue, he did not look for clubs to coach, did not hang out on talk shows, did not accept advertising agreements, nor did he sign consulting contracts. He just stood aside, with an impeccable sense of leaving the scene, not clinging to the nostalgia for glory. It was more than enough for him to keep his memory ”.

Dino Zoff, “his of him” world champion goalkeeper, wrote about him: «The truth is that Bearzot has always been, like me, a foreign body in this system, in this country. If I had to enclose that cultured and intelligent Friulian in one word, the word would be modesty. Nobody uses it anymore today. Instead, for him it was a kind of North Star ». And then: «From the ethical point of view, I would define him as a man endowed with ferocious honesty. I don't know if he has a nice sound, as a definition. But it does not matter. This was. And for that stubborn honesty, so contrary to the common trend in Italy in the eighties, kneeling before hedonism and the religion of the media, he ended up being detested "