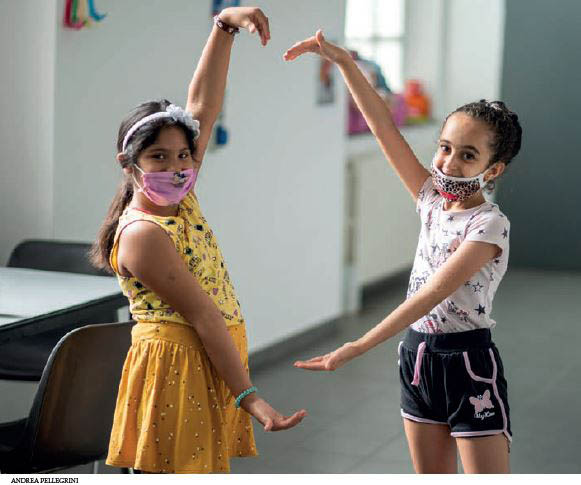 The health emergency is not over yet, but the first signs of recovery encourage us to think about the future.
Difficult situations come together. The epidemic has once again confirmed the interdependence between people, the need for community, and has made us touch our vulnerability and weakness that brings us back to a need for unity with others. Challenges like this either you face them together or you don't get out of them. We are all part of the same humanity, of the same human family, and only together can we find the scientific, social and economic solutions for this crisis.
However, a reconversion is needed, at all levels. From school to industry to healthcare.

And above all it is necessary to recognize that there is a common responsibility.
Certainly politicians are responsible for the most obvious decisions, but we are all ruling class, everything is political, because the institutions on which the country is based are not only of a legislative and governmental nature, but also judicial, media, economic, social.
The leaders of the parties and the government are the ruling class, but also entrepreneurs, trade unionists, churchmen, teachers, magistrates, journalists, senior public officials, presidents of associations, universities and foundations. All those who have the ability to influence public opinion or shape the identity of a company are the ruling class. Therefore not only the politicians.

Each of us, then, in some way makes politics, when he adopts a style of consumption rather than another, when he participates in a petition or in a public event, when he votes, when he decides to contribute to the life of his community by volunteering or supporting an association with their savings, when releasing certain messages on social networks.
The identity of a company is also shaped in this way, through the sum of many individual choices that become collective and can be animated by community attention.

The moment we think that everything depends on politicians, the very idea of ​​democracy dissolves, the link between representatives and represented, between elected representatives and electors, between those who express a delegation and those who exercise it is loosened. Politicians do not come from Mars, they are chosen by their fellow citizens, at least in democracies, and they are the mirror of the society that elects them. It is therefore very convenient to point only to politicians as the source of a society's problems.
Politicians are a piece of the machinery, often decisive, but they are not the only ones responsible.
Therefore it is important to form good politicians, but also good magistrates, good journalists, good public officials, good entrepreneurs, good trade unionists, good churchmen, good university teachers, etc. Also because almost always the politician passes, while the others remain.
Furthermore, citizens can play a controlling role, on how money is spent, on how the people who have been elected behave, on what happens in the institutions.
A mature and attentive citizenship, in all phases of democratic life and not just on the day of the vote, is an excellent antidote to corruption and moral degradation.

In 2015, the book by Canadian philosopher Alain Deneault was released, which was provocatively titled "Mediocracy".
The author's thesis is that nowadays, to be co-opted in companies as well as in organizations and decision-making posts, conformism wins.
The mediocre would have taken power, competence would have given way to pure and simple execution, without any specific art and expertise.
And in fact, the impression is increasingly widespread that our politicians and the entire ruling class are rather mediocre or even that the best are going abroad, exasperated by the twisted and opaque selection mechanisms of the Italian ruling class. The point then is not to cut the number of parliamentarians or launch new anti-caste campaigns hiding behind forms of purge that do not change practices, but to go to the heart of the matter, re-setting the processes of formation and selection of the ruling, political and not, to bring out and support the most capable and serious people, who are there in abundance and will be indispensable to restart after the Covid-19 crisis.
We really have to fly higher than mediocrity.

As Ernesto Olivero says, "the keywords are two: competence and hope, to make a qualitative leap in public action. We start from the seriousness of our skills, we start from the hope of learning from what we have experienced, we also start from our fear, from our fragility. Let's start again from the problems we encounter, let's try to look at them in a different way: already transfigured and transformed ». Reconvert.