Everyone on the pitch 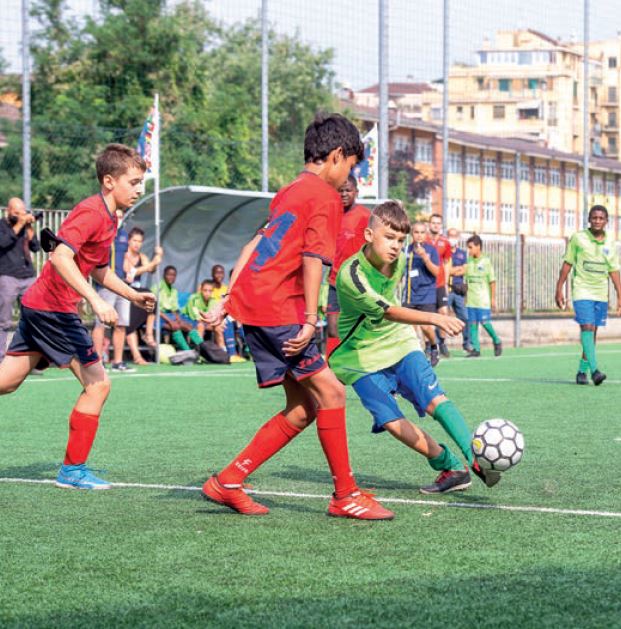 Children and families in the Aurora-Porta Palazzo district in Turin have a new space to experience sport. This morning - 25 July - Sermig inaugurated its new 5-a-side football pitch in synthetic grass in Via Carmagnola, the first part of the project For those without sport.
«This place was first a center of drug dealing and crime» explain the Sermig managers, «the redevelopment was born from the desire to play with the children of our neighborhood in a safe space». For Sermig, sport is above all an instrument of integration and dialogue in a difficult neighborhood characterized by multiple situations of degradation.
"Each of you is a welcome guest in the new spaces of the Arsenale della Pace, which increasingly takes on the face of humanity around us," said Ernesto Olivero. A lot of gratitude: «The first thanks we say to the president Sandro Pertini, who in the Eighties came to inaugurate the Arsenal of Peace to defend us and bring us his gratitude. This "thank you" has continued over the years: all the presidents of the Republic have made their visits to the Arsenal ».

The inauguration involved the institutions of the City of Turin and the Region. «Giving young people the opportunity to experience the neighborhood in a different way means creating culture, education and legality. Safety in the territory comes first with the education that everyone does. And Sermig does a lot ”said the prefect of Turin, Claudio Palomba. The proximity of the Piedmont Region was brought by the councilor Fabrizio Ricca: "Sport breaks down barriers, creates a ground for comparison on an equal footing, allows society to improve". Luca Deri, president of District 7, defined the new building "a gem for the whole Turin area".
The dialogue with the institutions then moved to the field, with the ball and chain: after the ribbon was cut, the first Sermig team challenged the Sport, legality and safety team made up of the prefect and the police. The team's second-hand coach was the Questore of Turin, Giuseppe De Matteis, among the players also staff of the Guardia di Finanza, the Carabinieri and the State Police.

A game that marks a direction: playing on the same pitch for the good of the neighborhood.
Next to the 5-a-side football field, a 400-seat multipurpose building is under construction, the sports offer will be expanded and the number of children and families involved in Sermig activities will increase. For many years the ASD Sermig has also been born, which manages the current sports activities and will then manage the building under construction. Almost everything is self-financed by Sermig, which is involving friends and supporters for the great effort required.
The project is also present in Brazil in Jordan where similar activities are being carried out.