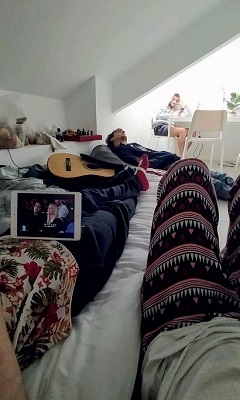 Erasmus programs start with an application in which the student can indicate some choices of foreign universities in which he would like to spend a period of study. Coimbra, in Portugal, was not among my choices and when I received this proposal via email I was amazed. However, you have a few days to accept or reject the assigned destination and the phrase that kept ringing in my head in that week was "the unexpected welcome". I had never been to Portugal, I did not know its language and I would have apparently left alone, but with the knowledge that the thought of my family and a multitude of friends would accompany me everywhere. And it was they who advised me to leave in February instead of September, to be able to enjoy the beautiful Portuguese weather more than in autumn, its coastal and sunny landscapes, the typical traditions of the city where I would have lived for 5 months and which has the oldest university in the whole state, founded in 1290. Portugal, and in particular Coimbra, is the country most anchored to traditions that I have ever known: it is precisely the young people who have carried them on for generations and generations, thanks to associations students. Some traditions have changed adapting to the times and to new students, but the most obvious one that everyone can notice walking around Coimbra between September and June, is that university students from the second year of the course wear a local uniform, including a long cloak down to the feet! Just the typical style to which the writer J. K. Rowling was inspired to dress her wizards led by Harry Potter. I was welcomed like this the same evening I arrived in the city and I could not help but be fascinated by it too. At dusk on the University square you can even hear the bats flying inside the Joanina library, looking for the insects that live among the oldest books.

So, among many searches on the internet but with the little knowledge I had, I left, taking and accepting a possibility that had been given to me at a precise moment that I felt the need so much. I had no expectations, but I certainly did not imagine that I would return to Italy so full of joy, of new relationships, of a greater and changed awareness of myself that I would not have acquired if I had not found myself in so many difficult situations and in as many rewarding.
Until March I was lucky enough to attend school every day, from morning to night, sometimes starting at 8am to go back to my room at 10pm and immediately fall asleep after a video call at home. My roommates went out every night, like many other international students, and then came back the next morning while I was getting ready to go to class. I often wondered if that really was my place and why we had such different priorities between us.
At the university I was meeting some local students who, communicating in English, were trying to help me translate those concepts that I could not understand in the original language in class. The second week of March I learned that I could finally start my internship in a Primary school and I was as enthusiastic as it was intimidated: seeing "among the desks" what is done in a foreign country and then taking it to Italy was for me one of the main reasons why I applied for Erasmus, but I felt limited, because one thing is to understand the concepts expressed in a language not too well known, another is to have to speak it or understand what 6-year-olds are trying to tell me.

The news of the spread of the virus was also taking hold there, slightly later than in Italy, and we Italian students began to receive emails from the University asking us to stay in fiduciary quarantine in case we arrived in place for less than two weeks. On 9 March we were warned that the universities would close the following day and the internships would be suspended, because the schools no longer felt safe to welcome outsiders. The situation in Italy was worsening day by day, while instead among all the international students there was no concern: the universities were closed, while all the pubs continued to be overcrowded and we Italians began to feel responsible for a failure to intervene. done, especially seeing in advance what would probably happen shortly thereafter also in Portugal. We then got in touch with the owners of the clubs who saw hundreds and hundreds of young people amassed every evening. From the following day those meeting places closed, and immediately after Portugal went into lockdown, on March 13th. Since that day we have seen many of our friends leave in a hurry who had come there to have fun and have fun, on our phones more and more calls were arriving from family members worried about making us go home, we received more or less reassuring emails from both the University Italian and from the host one and we read from everywhere different news regarding the choices made by the Government. Until all flights to and from Italy were suspended. Wow. At that moment my roommates and I looked into each other's eyes and we realized that we had remained together, closed in a real attic and unable to go out, but together. The four of us: two girls and two boys, very different from each other, who hardly knew each other because they had spent the past month with different companies. Well, they have become the best months of my experience. Every day, between one online lesson and another, a new way of occupying time and energy was born in someone's mind, ideas were born, time was born for personal and common reflections, passions were born, friendship was born between we.
A person I love says that the harder things are the more they are of God. Well, I can't say that it was easy to experience Erasmus during a world pandemic, but the heart, as happy as in those months, can only a gift. A gift that started with a yes said with confidence, giving me yet another confirmation that wherever I go, wherever we go, we are never alone and that even the unexpected, if welcomed and loved, can give you infinitely more than everything that was instead expected.