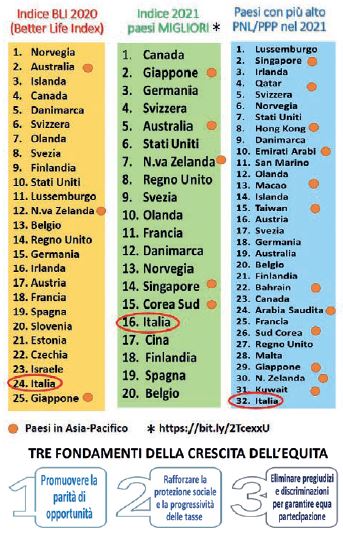 World reports and rankings use thousands of criteria and comparisons to determine which country excels more than others, so much so that not even the Guinness Book of Records can list them all. GNP (Gross National Product) allowed the first ranking of national wealth per capita, to which economists today prefer PPP (Purchasing Power Parity).

Development sociologists prefer the Better Life Index (BLI), which was created by the OECD in Paris. And at the beginning of the third decade of the third millennium, the best quality indices of the environment and health, those of democracy, participation and happiness are highly sought.

Although it was the weight of the economy that created the famous G7, group of the seven largest economies in the world, then followed by the group of the twenty largest economic powers (G20), today the necessary ecological and socio-economic transition pushes most to evaluate above all equity, greater equality of opportunity; in fact it has finally been understood that it is of little use to be the second or third largest economy in the world (USA and China) if inequalities of opportunity grow internally. 2020 and 2021, the years of the pandemic, have also created an earthquake in the quality rankings of the countries and the US News and World Report has produced a new super-index, which brings together all the quality criteria, to make a ranking of Countries where it is better to live. In general, Italy has lost several positions in the rankings, while many positions in the high rankings have been conquered by Asian countries.