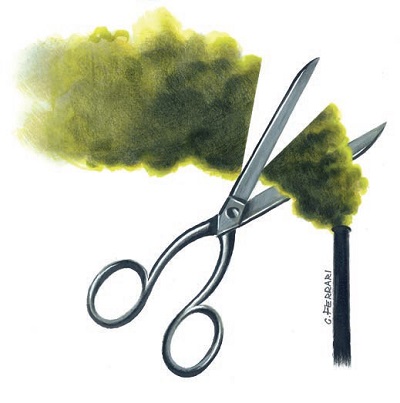 "Each of us can do something" was and remains the leitmotif of ecological culture. Today, however, it is increasingly a question of understanding what is going on in concrete actions and not only in the words of the many subjects who decide big choices Let's review the signs. Excess greenhouse gases are produced by human activities: energy production (73.4%), agriculture and animal husbandry (18.4%). Energy is produced for industry (24%), transport (16%), heating (17.5%).
In 2015, 196 countries signed the Paris Agreement: a commitment to keep the global average temperature within 2 ° C - but preferably 1.5 ° C - of its pre-industrial level. In Europe, 2020 was the hottest year ever. The European Union has decided to reduce greenhouse gas emissions by at least 55% compared to 1990 levels by 2030 (10 fundamental years) and then reach net emissions of zero in 2050. To do this, the our industrial, energy, mobility and food systems. High investments are needed. The Action Plan is called the European Green Deal, an environmentalist relaunch of the European project. The challenge is to transform environmental issues into development and innovation, create jobs, reduce unemployment and inequalities. For Commission President Von de Leyen « Europe will be the first climate-neutral continent. But he doesn't want to be the only one ».

The European Union now accounts for 10% of global emissions. In 2020, 6 countries are responsible for 60% of total greenhouse gases: China, the United States, India, Russia, Japan and Germany. Italy is in twentieth place with the emission of 33 giga-tons, a little less than half of Germany. Our per capita contribution takes us to fifteenth place (5.56 tons each), less than the Germans, Poles and Brits, but more than all other Europeans. The cumulative emission of greenhouse gases is attributable for 25% to the United States, 22% to EU countries, and 12.7% to China.

How to move from trade and geopolitical battles to a true global Green Deal? The USA (15% of total emissions with 4% of the total population) has rejoined the Paris agreements and promoted the international summit of the April 22 (Earth day). For Joe Biden, "the US wants to achieve a zero-emission economy by 2050". China has declared that it will be carbon neutral by 2060. For the UN secretary Antonio Guterres it is time to translate the commitments made into concrete actions. the International Energy Agency has sounded the alarm. 2021 risks being the second most damaging year in history for the amount of CO2 released.
Google Earth for Earth Day 2021 has provided a new feature: Google Earth Timelapse: allows you to observe on your mobile how the planet has changed in the last 37 years: 24 million satellite photos from 1984 to today.