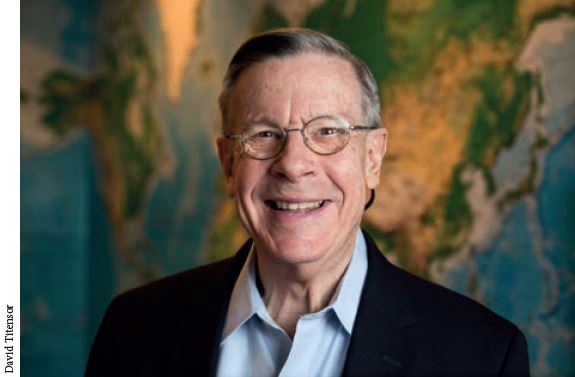 The disappearance of Edward Diener (pictured), also known as "Dr. Happiness", has almost gone unnoticed. Among the most influential social psychologists in the world, best known for his pioneering research on happiness, the American author passed away at the age of 72 last April, at his home in Salt Lake City, Utah.
His research focused on measuring happiness, which can be broken down into three dimensions: positive emotions, negative emotions and life satisfaction. Aspects based on self-assessments of people through questions now validated all over the world, objects of investigation of many researches on happiness. Among these, for example, is the World Happiness Report, which offers a global and comparative overview of the well-being of our societies.

Another line of research by him is that relating to the explanation of why, if income apparently correlates with well-being, increases in income are not followed by increases in happiness.
His studies have highlighted several explanations for this phenomenon, known in the literature as the "Easterlin paradox". He pointed out, for example, that income does count for happiness, but only up to a certain point.
Beyond this threshold, increases in income do not translate into significant increases in happiness. Among the different explanations, there is the hypothesis - empirically validated - that we tend to get used to the changes, returning to the initial level of happiness after positive or negative shocks, which may come from positive or negative changes in income. In general, studies of him show that external conditions have little influence on changes in happiness. In fact, in a recent article it was found that adolescents from working-class families were happier than adolescents from rich families.

Furthermore, Ed Diener found that even most disadvantaged individuals, such as people with disabilities and even quadriplegics, tend to report above-average levels of happiness: probably - according to the author - there is a universal genetic predisposition to positive emotions in humans. Consistent with the adaptation / habituation theory above, we are programmed to be happy and even horrible events often upset happiness, but only temporarily. However, easy generalizations must be avoided. The same author notes that there is a sharp decline in happiness for those who are 100% disabled, mainly because they are unable to do any work.
In general, therefore, people are able to adapt to a change in life, but that adaptation is not perfect (complete) and does not happen for everyone in the same way.

In light of the pandemic that has had, among its many consequences, an enormous impact on social relationships, his results on the social determinants of happiness are incredibly current. If income is only partially relevant to our happiness, social relations play a fundamental role. According to Diener, this is great news: many people who declare themselves unhappy can improve their condition by interacting with a good friend on a daily basis.
Finally, in his latest book, Diener highlights four central ingredients for a happy life: 1) psychological wealth is worth more than monetary wealth; 2) happiness not only makes you feel good, but is also beneficial for relationships, work and health; 3) it is useful to establish realistic expectations about happiness: no one is always deeply happy; 4) the thought, the awareness and the improvement of some cognitive fragility helps to increase our psychological richness.