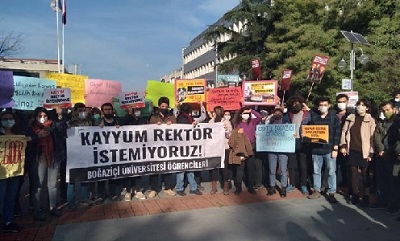 The snow, which after so many unfulfilled forecasts has finally fallen very abundantly on the shores of the Bosphorus, has not discouraged professors and students of the University of Boğazici (Bosphorus in Turkish), which for almost two months have presided over the university campus demanding the resignation of the new rector Melih Bulu, who was irritably imposed directly by the Turkish president. The perseverance of this totally peaceful resistance, in the face of often violent police interventions in an attempt to disperse the demonstrators and prevent any form of dissent, is increasing the front of inter-university solidarity in Istanbul and in the most important urban centers of Turkey. But the mobilization is taking on broader contours, if we consider two important appeals, signed by 173 journalists and 162 filmmakers, firmly calling for the release of students and teachers detained or forced under house arrest, guilty of having simply exercised their constitutional rights in name of academic freedom and university autonomy.

The University of Boğazici is an offshoot of the ancient Robert College, the oldest American school founded outside the United States, by Christopher Robert, a wealthy New York philanthropist and Cyrus Hamlin, a Protestant missionary dedicated to youth education. This institution was originally opened in 1863 for the education of boys only (a kind of confessional seminary), but followed, in 1871, by the creation of the Home School, which evolves to become the American College for Girls (ACG). This institution moved to the current Arnavutköy Campus (hill overlooking the Bosphorus) in 1914.
In 1971 the two schools merged under the name of Robert College (RC), which became a mixed high school. The same year, the university division of the RC, installed on the Bebek campus (not far from the Arnavutköy headquarters) was entrusted to the Turkish government and established as Boğaziçi University.
Since its foundation and through its various phases, the RC and the subsequent Boğaziçi University have continued to be one of the most famous educational institutions in Turkey: the most prestigious in English, fundamental, together with the Francophone Lyceum and University of Galatasaray, for the formation of the cultural and political elite, between the end of the Ottoman Empire and the nascent Turkish Republic. Not only that, pioneering primates in various sectors belong to the RC Institution. Home of the first Turkish student council in 1892, of the first basketball game played in Turkey at the Dodge Gymnasium in 1908, of the
first Turkish medical school for women in 1920, of the oldest student literary magazine in Turkey, İzlerimiz (Our Tracks), first published at the RC in 1926 and of the first children's study center in Turkey, opened in 1958. Returning the current crisis is the tip of the iceberg of a progressive reduction of democratic freedoms in the country and of a vast plan to occupy the ganglia of cultural and scientific production, as if progress, more generally, could be considered as a threat for a nation.
At Boğazici University, Tayyip Erdoğan has not limited himself to appointing one of his men as rector, bypassing all university self-management bodies, but has already created two new departments with deans and professors of his liking, with the intention of infiltrating more and more in the academic body. The dismantling of the country's intellectual elite is unfortunately a process that has consolidated in recent years, also passing through a gradual accentuation of Turkey's isolation from that essential exchange of knowledge with the world.

Not only is the country no longer the coveted destination of Erasmus from all over Europe, but dozens of foreign teachers are encountering ever greater difficulties in seeing their residence permits renewed and therefore in teaching and teaching. research within Turkish universities. Until when, this terrible intellectual bleeding and squandering of skills? It is difficult to make predictions even if several indicators, especially economic ones, are launching dangerous alarm signals, which cannot be ignored indefinitely. In this sense, the announced project to rewrite the Constitutional Charter, in view of the 100th anniversary of the Republic (1923-2023), will hardly be the panacea and act as a red herring for a hungry people.